"...playing golf with Frank Sinatra and Dean Martin by happenstance..." 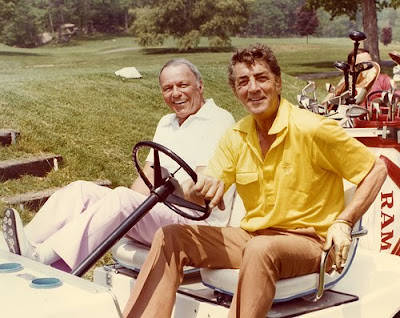 Hey pallies, likes I am always amazed by the amazin' number of lives that our Dino has touched...in life and in death. Likes I am always thrilled to read 'bout 'nother pallie who got to met and greet our Dino and be blessed by bein' in the presence of our great man.

Today's Dino-remembrance comes from the on-line presence of the "Galveston Daily News" where reporter Hayley Kappes shares news of the death of Monsignor Eugene Cargill, a much loved parish priest.

Accordin' to this feature article, Father Cargill durin' a 60's trip to 'Vegas "by happenstance" got to play golf with our Dino and the frankie. Now how cool is that...priest in is early years of ministry gets to swing clubs with our Dino! And likes how outstandin' that he musta shared time and time again that eventful Dino-event!

ilovedinomartin expressed our heartfelt sympathy to the friends and parishioners who mourn Cargill’s death. Thanks to the Galveston Daily News and Miss Kappes for includin' the Dino-remembrance in this tribute to Monsignor Eugene Cargill. To view this in it's original format, just clicks on the title of this Dino-message. Dino-sharin', DMP 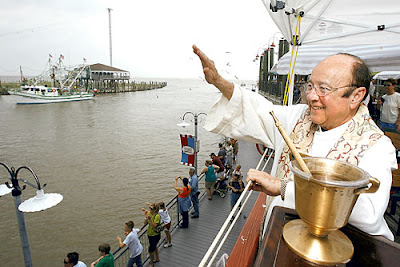 Monsignor Eugene Cargill, who served St. Mary Catholic Church in League City for more than 20 years, waves during the 2009 Blessing of the Shrimp and Pleasure Boat Fleet at the Kemah Boardwalk. Cargill died Monday at 76.

Cargill shared stories with Garner about playing golf with Frank Sinatra and Dean Martin by happenstance during a trip to Las Vegas in the 1960s.

Then there was the cake Cargill baked that fetched $20,000 at a church bazaar silent auction.

Monsignor Eugene Cargill passed away Monday morning at Cornerstone Hospital in Webster. He was 76.

“The fondest memories are the times he spent with us one-on-one,” Garner said. “My wife and I were money counters for church collections. When we were on duty, he would sit and visit with us reminiscing. He always had a story to share.”

Garner, judge of Galveston County’s 10th Judicial District Court, first met Cargill in the mid-1970s when the pastor served at Shrine of the True Cross Catholic Church in Dickinson.

Cargill joined the priesthood in 1959 at Immaculate Conception Church in Groves and served at Sacred Heart Church in Galveston and other parishes in the Archdiocese of Galveston-Houston.

Cargill served as chaplain for astronauts in NASA’s space program during the 1960s. He traveled with them to the Kennedy Space Center in Florida for launches and provided spiritual guidance to the astronauts’ families.

He performed the annual Blessing of the Fleet in Kemah every May for more than 20 years.

In 1990, Cargill left Shrine of the True Cross to became pastor at St. Mary Catholic Church in League City, where he celebrated his 50th anniversary in the priesthood shortly before retiring in August.

“He so loved his parishioners at St. Mary Church, where he last served as pastor, that he continued to minister there beyond the normal age for retirement for a priest in this archdiocese,” DiNardo said in a statement. “When he retired last summer at the age of 76, his greatest concern was for his people and their spiritual well-being. He will be truly missed.”

He overcame a battle with liver cancer about 10 years ago, Garner said.

Cargill is survived by three of his sisters, Dolores Celli Jensen, Gwendolyn “Susie” Williams and Barbara Danner. Another sister, Edith Sabatier, died before him. His parents were Grady and Pearl Cargill.

Pam Hoerster, a parishioner of St. Mary and founder of the Hoerster Mediation Firm, knew Cargill for more than 15 years.

“I used to tease him that he could be a stand-up comic,” Hoerster said. “There was no one as sharp and witty and funny as Monsignor Cargill. He was artful and creative in how he humanized himself before his parishioners. He endeared himself to them, and they loved him for it.”

Visitation will begin at 5 p.m. Wednesday followed by a rosary at 7 p.m. at St. Mary Catholic Church, 1612 E. Walker St., in League City.

Burial will be at Mount Olivet Cemetery, 7801 Gulf Freeway at Hughes Road, in Dickinson.
Posted by dino martin peters at 7:15 AM

Hey pallie, thanks so much Ky for chimin' in on this Dino-post....very nice of you to stop by the Dino-blog and shares some Dino-patter with us...and yup, I loves this pix of our beloved Dino and the frankie in the golf cart...and likes of course it woulda be our Dino that is drivin'...