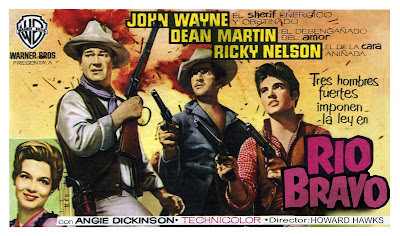 Hey pallies, likes today we happily returns to a flick blog where a Dino-sightin' occured earlier this Dino-week. From the pad, "Nothing Is Written: A Film Blog" where our pallie Groggy Dundee recent review of "The Sons Of Katie Elder" was shared here on Wednesday, comes Mr. Dundee's take on that Dino-classic western "Rio Bravo."

Loves to read how Mr. Dundee, at his daddy-o's knee, "watched repeatedly" this Dino-epic when Groggy was a kid. Provin' again the earlier you gets introduced to our Dino the deeper and purer the Dino-devotion goes. 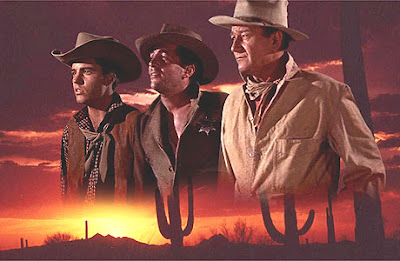 As you will read, Groggy's over-all impressions of "Rio Bravo" have lowered since he was younger, but his esteem for our Dino's performance couldn't be higher, Groggy raves...."Dean Martin is impressive, giving a subtle performance which balances action and quiet character moments." 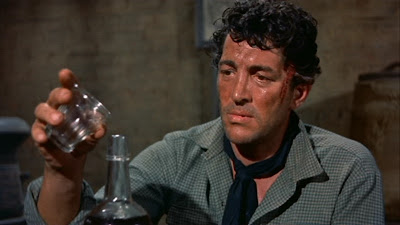 ilovedinomartin is so delighted to have discovered a new pallie in Mr. Groogy Dundee, and we hope that Groggy will see fit to review more Dino-classics at his great flick blog "Nothing Is Written: A Film Blog." To view this post in it's original format, likes just clicks on the tagg of this Dino-post. Dino-delightedly, DMP 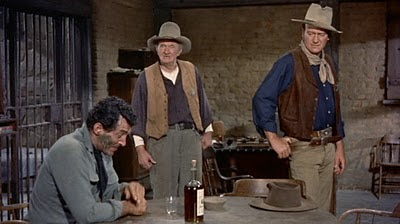 Howard Hawks's Rio Bravo (1959) was a film I watched repeatedly with my dad back in the day, and I finally purchased the DVD over the weekend. Unfortunately, although enjoyable, Rio Bravo is not the sum of its parts, encapsulating both the good and bad of the Classic American Western. It's clearly the model for John Wayne's later films, complete with slight plot, lame young sidekick and push-over baddies. Fortunately, Rio Bravo is a Howard Hawks film, and despite its flaws it's an entertaining Western.

Supposedly a conservative answer to Fred Zinnemann's High Noon (1952), Rio Bravo is a perfect distillation of Howard Hawks' preoccupation with professionalism and grace under fire. Unlike Gary Cooper's meek Will Kane, Chance and his buddies don't need help - interlopers like the kindly wagon master Wheeler (Ward Bond) are "well-meaning amateurs" who are liable to get themselves shot. These guys need to bond and prove themselves worthy of inclusion in Chance's team: Dude by sobering up, Colorado with some fast shooting. With fellas like these working together, the wimpy Burdettes don't stand a chance.

It must be said, Rio Bravo is seriously flawed. Its slow, languorous pace belies its simple plot, and too much time is spent hanging around in bars, yammering about what has happened and might happen, and worst of all, singing cheesy cowboy songs. Suspense is largely frittered away by these sidetracks, the siege interrupted by repeated trips outside. The bad guys are push-overs who doom their chances by stupidly refusing to kill Chance and Co. time and again. Worst of all is Feathers, a pushy Hawksian woman who is completely out-of-place. Say what you will about Joanne Dru in Red River, at least she played some role in the story; Dickinson, though lovely, is just window dressing.

Nonetheless, Hawks excels in individual sequences. The best two are early in the film: the almost-wordless opening, where a shamed Dude confronts Joe, and Dude's ferreting out a murderer concealed in a bar, betrayed by a dripping gunshot wound. These scenes are brilliant, self-contained set-pieces that almost work without context. The action is briskly filmed, and despite the languid pace, the film is never boring per se; just tedious. Still, Hawks crisp direction and Leigh Brackett's witty script command attention, and there's little technical fault with the film, aside from Dimitri Tiomkin's underwhelming score.

John Wayne gives a fine performance: if ever a film embodied the Duke's iconic, tough-guy image, it's this one. Dean Martin is impressive, giving a subtle performance which balances action and quiet character moments. Marginally-talented singer Ricky Nelson is sidelined just enough to avoid making a complete ass of himself. Angie Dickinson's character is useless, but at the very least she's charming and has some chemistry with the Duke. Walter Brennan (My Darling Clementine) does his usual cranky old pappy shtick, which isn't too annoying here. Ward Bond (The Searchers) has a nice bit, but Claude Akins (Inherit the Wind) and John Russell (The Outlaw Josey Wales) are wasted, and Pedro Gonzalez-Gonzalez's antics get tiresome really fast.

For all its faults, Rio Bravo is a fun and well-made film, and it provides a fine introduction to Wayne and Hawks.
Posted by Groggy Dundee at 6:34 PM
Posted by dino martin peters at 7:15 AM

Is that the movie poster or a newly-created work of art?

BTW, I never tire of listening to our Dino singing the song "Rio Bravo." Beautiful!

Hey pallie, Miss AOW, I loved that pix so much when I saw it...I think it is a recreated piece of Dino-art....the provocative question ma'am is likes how coulda any true Dino-holic likes ever tire of hearin' our Dino sings anythin'?

This is one of my fav Dino movies
I gotta agree tho, i dont like Angie Dickinson, i think the movie would be better without her.
She is like Inger Stevens in 5 Card Stud, pushy and she thinks she is better than the dudes.
I like the old man, he was funny.
Didnt think Ricky Nelson was right for it, he looks like a boy
Still one of the best movies ever made tho
Levi

Hey pallie, Deanager Levi, how cool to read your Dino-thoughts on this tremendous Dino-flick..and likes dude, gotta agree with you on Angie and Ricky....the Duke, and Mr. Brennan are great...but our Dino is the greatest in "Rio"...again thanks so much for lettin' all us pallies know your Dino-perspective....and as always, keeps lovin' our Dino....