Sure enough, Dean was waiting for us!

Hey pallies, likes here is a great little Dinostory 'bout a lady tagged Jessica who gots to go to the Rege's show and gots her pix taken with our Dino (of the cardboard stand up type) and the Rege. If you wanna reads this in it's original Dinoform at the blog Jessica Shops, just clicks on the tagg of this Dinopost. How Dinogreat to see the Dinodevotion that continues to be shown by today's youth. Dinodelightedly, DMP 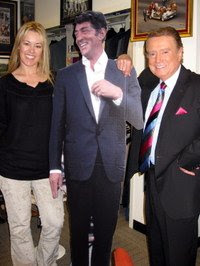 ME & MY NEW BFF REGIS PHILBIN
WHAT A COOL DAY TUESDAY WAS!

So we get our tickets to LIVE with Regis and Kelly, and Jeff has this big idea that I should get my picture taken with the big Dean Martin stand-up that Bert sent to Regis as a thank you for mentioning The Bert Show on LIVE a few months back. He called the show publicist and shared his idea, but as it was a last-minute request, we didn't expect anything to come of it.

My friend and I get to the studio before 8, as instructed. I give my name to the attendant, and he asks us to stand to the side. A few minutes later, the publicist for LIVE (hi, Barbara!) comes down and tells us that we can take the picture with Dean - in Regis' office! - after the show. Of course, we asked about a pictures with Regis and Kelly and she said that wouldn't happen, as they had a post-show event as soon as the broadcast ends. Then she walked us over to the line and put us right at the front, and when we got in the studio (which is much smaller in person, by the way) they sat us front-row center.

The music starts and Regis and Kelly come out and LIVE begins. We were only about 5 feet from them and it was awesome. During the first commercial break, Regis and Kelly get out of their seats and come right up to audience and talk to everyone. Then we are back on and Vanessa Hudgens comes out and she is REALLY pretty in person.

And then, it starts to get REALLY fun. After Vanessa, Regis and Kelly get up from their seats and come right over to ME. Regis introduces himself and then says something about the Dean Martin thing. Kelly introduces herself and says something about the High-Heel-A-Thon (that was the reason Regis was on with the Bert Show, that started the whole Dean Martin thing.) I have to be honest ... I was starstruck! Don't know why, because normally I don't get that way! Maybe it was the live show, or that they were taking time out DURING the show to talk to only me, but I don't remember the particulars of what we said. They were totally nice, and I was able to introduce them to my friend, and then the break was over and they went back to the desk and the show continued.

Fast-forward past the other guests (Gavin Rossdale totally hot) and now it's the end of the show. We stand where we were told to stand, and an intern comes to take us to Regis' office and Dean! We walk down a back hallway, and standing at the elevator is REGIS! He asked if we were on way to his office, and told us HE would take us! We hop in the elevator WITH REGIS and he was SO NICE and SO FRIENDLY and is talking to us like we are old friends. We get off the elevator and start weaving through the cubicles to Regis' office. Sure enough, Dean was waiting for us!

Regis couldn't have been nicer. He posed for pictures, told us funny stories, asked about our visit to NY, and was as nice as can be.


After about 15 minutes, we thanked him and headed out ... where we ran into Kelly! She, too, was AWESOME. She asked about the pic with Dean and thanked us for coming to the show. BUT WE FORGOT TO GET A PICTURE WITH KELLY RIPA! Arrrrrgh!

But the excitement didn't end there.

After we left the studio, we wanted to find a Starbucks to sit and review the great morning. So we started walking, and I was calling Jeff and friends to share the experience. I was standing in front of Starbucks when I saw David Muir. I hung up on the person I was talking with.

Who is David Muir, you ask? Well, he's a reporter and anchor for ABC News. He was also Jeff's best friend in high school. Jeff's parents have kept us both in the loop on all of the steps of David's awesome career, from local Syracuse reporter to anchor to Boston local to national ABC stuff to doing GMA and filling in for Charles Gibson. One important note: Jeff's graduating class was only 60 people or so! Talk about small world!

He looked surprised and scared all at once. I was still on the high from Regis & Kelly, so I was talking a mile a minute. I finally got out that I was Jeff Dauler's wife, and David realized I was 'safe.' He bought us our coffee and we talked for a bit. I congratulated him on his success, he asked a ton of questions about Jeff and Jeff's family. I made David pose for a camera phone picture with me, that I knew would blow Jeff away. (I found out later I was right.)

WHAT A FUN DAY!
Posted by dino martin peters at 7:44 AM

THIS IS REALLY A CUTE PIC! I JUST LOVE THE DINO CARBOARD STANDUP. I FOUND ONE OF THOSE ON EBAY WHILE LOOKING AT DINO STUFF ONE DAY.

Hey pallie DMP. That is so awesome. She's one lucky lady. That sounds like a really special and cool day she had. Thanks for sharing this story with us. Cheers! Keith

Hey pallie Keith, dude likes you are just so Dinowelcome...yeah this chick is one lucky lady...just wishes it had been my Dinostory...