Autographed Pix of our Dino and the frankie

Hey pallies, likes thinks is pretty Dinocool...founds this autographed Dinopix of our Dino and the frankie over at Flickr, where a dude tagged Dion Jackson states that he worked with our Dino and Deana at the Family Fitness Center in Century City.
To view it in it's original Dinoform, just clicks on the tagg of this Dinopost. What woulda I give to have met our Dino and got him to sign a Dinograph for me!!!! Dinodesirin', DMP 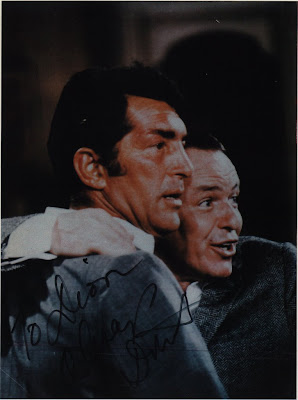 Worked with Dean and his daughter Deana Martin at Family Fitness Center in Century City. Also did the Dion & Deanna Show for cable access.
Posted by dino martin peters at 7:35 AM

Hey pallie DMP. That is so cool. I would love to have the autograph of both Dino and Frankie. I know you won't care to have Frankie's though. lol

Hey pallie Keith, yeah, you are certainly Dinocorrect on my Dinopreferences....I woulds love to so be this Dion dude who gots to meet our Dino and gets the Dinograph...very Dinocool...

I'm surprised you didn't make some comment about not wanting Frankie's on that pic though. lol

Hey pallie Keith, lol....wells dude...I woulda certainly Dinoperfer a Dinograph of just our Dino...but I thought this Dinostory of this Dion guy was just to cool, not to Dinoshare....likes when I haves to I will include folks like frankie if likes I Dinomust...btw pallie, likes so you remember readin' in Toshces' stellar Dinobio that there were Dinoyears likes when our Dino only saw the frankie likes maybe on time a year...too much is made of our Dino's pallin' with frankie...it was the frankie that craved Dinocloseness not the other way 'round....

Man - this makes me wish I had an autographed picture of "Old Blue eyes and Old red eyes.

AKA Frank and Dean.

Hey pallie Glenn, our Dino's eyes were actually brown...as I am sure you are truly Dinoaware..but loves your comment 'bout his red eyes...if you haven't been able to tell yet...I am no fan of the frankie....passable voice, but no cool what so Dinoever....again thanks for stoppin' by and supportin' this Dinospace...

When Dean and Frank came to perform at the Saber Room in Palos Hills IL my Dad and Mom went to see the show.

My Dad was the MC at the Saber Room and he spent time with them after the show.

The towns around Palos Hills IL all had signs welcoming Frank and Dean and one of them read - Welcome Old blue eyes and old red eyes - a gag on Dean Martin's comedy drinking in the show.

This was back in the 70's when they used to perform shows together once and a while.

Hey pallie Glenn, how likes totally Dinocool that you father and mother got to hang with our Dino and likes thanks so much for the Dinohistorical Dinostory behind blue eyes..red eyes...