Hey pallies, likes you just never know where our Dino will turn up next....here's some way cool Dinodevotion comin' from India, where a 27 year old Delhiite fashion designer tagged Rajvi Mohan unveiled her "Rat Pack Nirvana" line of men's clothing devoted to our Dino and the rest of the pack. Checks it out below, and as Dinousual, in you wanna reads this in it's original format, just clicks on the tagg of this Dinopost. Wishin' I had me the bread to buys me some of these Dinoinspired threads.... Dinodiggin', DMP 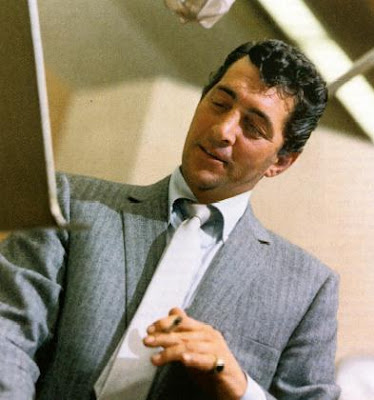 The inaugural Delhi Fashion Week kicks off in the city — sans a ramp
Possibly one of a handful of female designers making menswear, Rajvi Mohan, 27, kicked off the maiden Delhi Fashion Week that started at the DLF Centre, adjacent to Emporio Mall, on Tuesday. The Delhi Fashion Week is small in scale, with less than 30 designers participating (at last count, the Wills India Fashion Week had over 70). However, on Day 1, things went off as they should — right from efficient valet parking to well-spaced out show area to food options, you can pick between AD Singh’s new Japanese restaurant Ai and a more familiar Costa Coffee counter. There are teething issues, of course. Late starts apart, the ramp here is a flat strip of white cardboard (diligently covered with a white sheet at other times and guarded by a pack of ushers). “The idea was to make the shows compact and closer to the audience, so we decided to do away with the conventional ramp,” says Geetanjali Kashyap of the Fashion Foundation of India (FFI).

Mohan made her first ever participation at a fashion week in the country with “Rat Pack Nirvana”, a tribute to her fashion icon, Dean Martin. The Delhiite comes with impressive credentials, having trained with the famed Vivienne Westwood and studied at the Parson’s School of Design, New York. Her collection, which has a hint of Indian prints, is otherwise inspired by the grunge look of the Forties and the Fifties and a generation of entertainers like Frank Sinatra, Sammy Davis Jr and Martin. “I wanted to do a line that would look at Martin’s sense of dressing in an Indian context. This is what I felt it would be like,” she said. There were front pleats and generous layering, intelligent panelling that highlighted the contrasts and an interplay of summer hues, from bright yellows to aster blues and wild limes.

Akshay Kumar and his costume designer Shabinaa Khan can pat themselves on the back for sparking off a trend. Mohan’s show had a liberal sprinkling of trousers cut to the knee for more formal capris, a look that Kumar has made famous in his movie Singh is Kinng. We liked the jackets in particular, with their streamlined lapels and play on essential summer textiles like linen and stretch cotton. The only patchy part of the show was the fittings of some of the ensembles — a few sherwani bottoms looked like a cross between zoaves and fitted pajamas.

Abhijeet Khanna’s collection, which came next, focussed on all things luxurious, even in these times of near-recession. His collection — an assortment of shift dresses, harem pants and tops, inspired by the Indian styling of French Rococo — was embellished with sequins and incorporated Indian embroidery in otherwise western silhouettes. Khanna had been design assistant to Manish Arora for over four years, and the affinity to Arora’s sensibilities clearly shows. The fish-scale-patterned dress that ended the show was reminiscent of Arora’s warrior collection.

The day also saw a fair presence of buyers. “We have commitments from 160 buyers and nobody has cancelled so far. It should be a fair turnout,” said Sumeet Nair of FFI. While Khanna’s show had quite a few buyers, the second half of the day was expected to have a stronger buyer presence. Those expected include Isetan from Tokyo, Ovo Studio from Madrid, Design Best from Bordeaux and Seibu from Hong Kong.
Posted by dino martin peters at 7:29 AM

Hi Dino Martin Peters - great post I like the way you bring up an interesting point that Dean Martin his look - sill inspires people today.

However if I got one of these suits it would not look as good on me as it would look on Dean Martin.

Hey pallie Glenn, dude likes wouldn't we all so Dinodesire to look as cool as our Dino....thanks for stoppin' by....

Hey pallie DMP. Wow! That is so awesome. It shows that Dino is still inspiring people today. He's influencing people around the globe. That shows the power and magic of the King of Cool. Cheers!

Hey pallie Keith, likes so Dinotrue dude...our Dino is truly the only true inspiration for total cool...wanna see what these Dinofashions looks like...

Hey pallie DMP. I agree with ya. I want to see what they look like too.