Hey pallies, likes we're gonna does somethin' a bit different this very Dino-week.  Likes 'cept for a special "This Day In Dino-history" post and barrin' any late breakin' Dino-news, we are plannin' on continuin' to devote this week to Dino-scriber Mr. John McElwee's  and likes a ton of Dino-homagin' posts from John's self-tagged blog, "John McElwee's GREENBRIAR Picture Shows."

If you were with us yester-Dino-day  likes youse knows that we put the tags Dean Martin and swinger into the ol' google search bar and one of the terrific thin's that popped up was some sweet scribin' a la Dino from McElwee 'bout our Dino's swingin' performance in the sex farce "Who Was That Lady."
Well as we mentioned in yesterday's Dino-post, we decided to see if McElwee had other Dino-devotion for us to share...and so likes today and tomorrow we will share John's rad reflections on "The Rat Pack  Does Vegas."

In Part One, Mr. McElwee makes it clear that he wants "to go back to 1960 and shake Frank Sinatra (and most of his pallies) for not applying himself more to Ocean's 11."  Well, we gotta 'fess up that on that point we appreciate John's choice of position, but for us much of the greatness of O11 is simply the ubber ultra laid back attitude of the swingin' cast playin' 'round with this flick set in the playground of playgrounds of the universe...'Vegas baby 'Vegas.

Likes what we mostly encourage you to do this Dino-day is soak in all the glory of the many and varied images...mainly includin' our main man that John has awesomely assembled for the post.  Likes we especially wants to hugely highlight the image below....'cause it's a Dino-graphic that we ain't ever seen before....truly truly puttin' the accent on our swingin' Dino as swinger extraordinare. 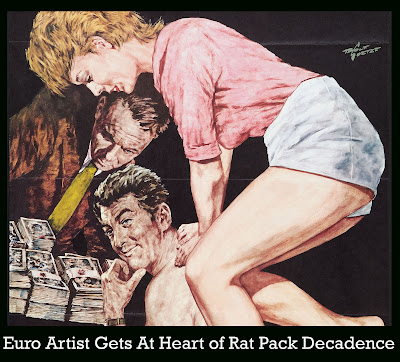 Also, McElwee has uncovered a couple of couple of cool primo promos for O11 that we ain't had a gander at before as well....."Six Spectacular Door Panels" that one coulda order to decorate their pad, and "11 Dollar Bill Give Away" featurin' our Dino and the pack on fake dollar bills.  Both of these are such incredibly cool promos that we woulda loves to gets our hands on.  We are gonna have to search the ol' web to see if we can find anymore info on 'em.

So, here's "The Rat Pack Does Vegas --- Part One" with mucho appreciato to Mr. John McElvee for puttin' all this Dino-fun together.  Likes, to checks this out in it's original source, simply clicks on the tag of this here Dino-report.  Dino-psyched, DMP

The Rat Pack Does Vegas --- Part One 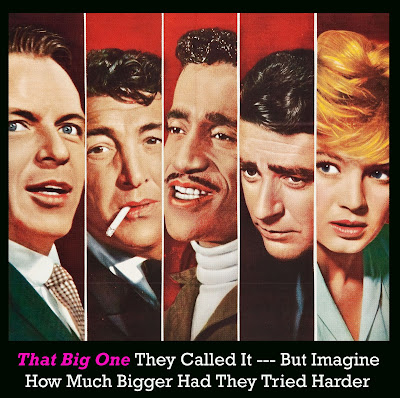 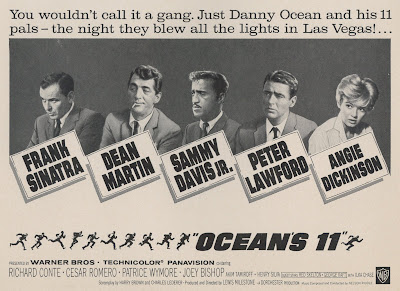 I want to go back to 1960 and shake Frank Sinatra for not applying himself more to Ocean's 11. Same goes for Rat associates, save perhaps Peter Lawford, who spent five years bringing O11 to fruition and made honest effort toward better outcome than what $3.1 million finally bought. Most was Warners' negative cost, dollars they knew would come back, and did, to swinging tune of $8.1 million, participants calling that a fine day's work and the heck with posterity's verdict. Did a goldbricking Pack really think so little of movies as to fritter away promise of this one? Dean tried on The Young Lions as Frank had with Golden Arm, and bothapplied selves to Some Came Running. Had they lost respect on this occasion for playing something close to lives they actually led? Ocean's 11 could have been a crackerjack thriller with song and novel background like movies seldom saw. Real commitment first time out might have been impetus for a Rat Pack series we'd respect more than spoiling cheese O11 and successors amounted to. But where's use of crying for lost opportunity fifty years out? Irony's jest is a remade Ocean's 11 for 2001 breeding (so far) two sequels, proof of standards since '60 lower even than Sinatra and Company's when they sluffed through the original. 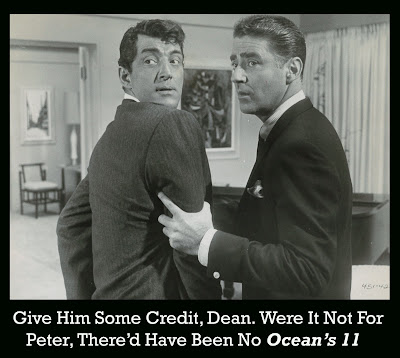 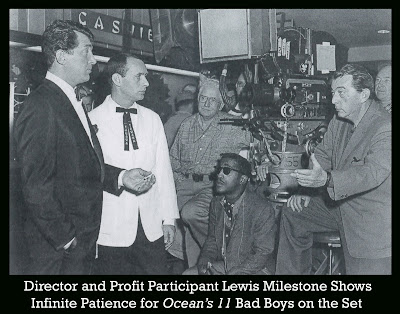 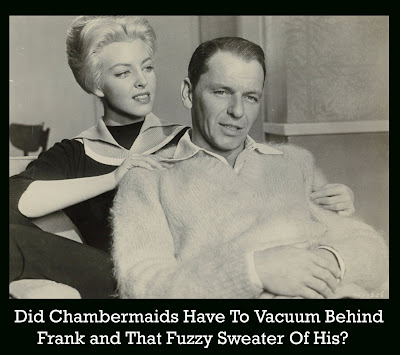 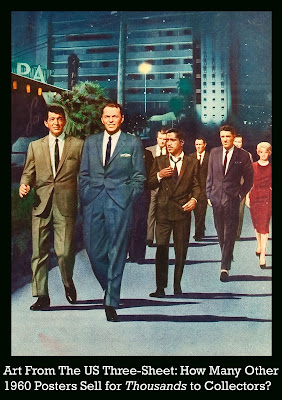 My family drove by Vegas on a motor trip west in 1962. I remember glittering signs outside, less the casinos within where my first game of chance was played upon a slot machine near the entrance. Pity I couldn't appreciate Sin City at its summit for being aged eight, but I do recall wondering why indoors kind of shrunk from massive neon canopies without. Surely a movie about all that would be fun, though. Peter Lawford thought so on receipt of a heist yarn he'd bought five years ahead of Ocean's 11. Modest prospects saw it farmed to TV director Gilbert Kay for a 1956 follow-up to his feature bow, Three Bad Sisters, indie Matador Productions going forward with this actioner not unlike then-recent Five Against The House. Somehow that fizzled and Ocean's 11 came across Sinatra's bar counter, his interest, ofcourse, making it a go. Lawford would stay on as co-star and now junior producer, their company called Dorchester. Casting announcements began flying, seemingly all of Hollywood wanting in on Frank's party. Dean Martin was set, then temporarily out for scheduling conflicts, Jack Lemmon slated to replace him in December 1958. By March of '59, they wanted Sugar Ray Robinson for what ultimately was the Sammy Davis part. Sinatra and Lawford sought Robert Wagner as well, but Fox wouldn't loan him. Neither could Steve McQueen get a leave from Wanted --- Dead Or Alive, the latter announced along with Tony Curtis as late as October 1959. Frank wanted cast-mates he'd worked with, thus an invite to A Hole In The Head's Edward G. Robinson, who proved unavailable. By time casting firmed up in January 1960 (as late as 1/8, Robert Culp was being floated for a "key role"), the caravan was set to winter in at Vegas for casino locations. 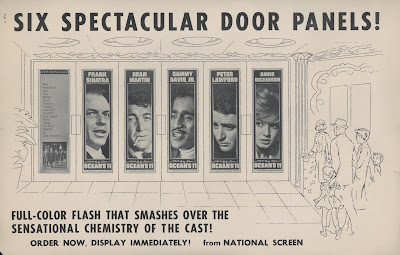 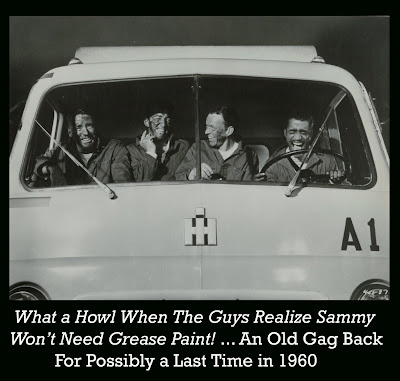 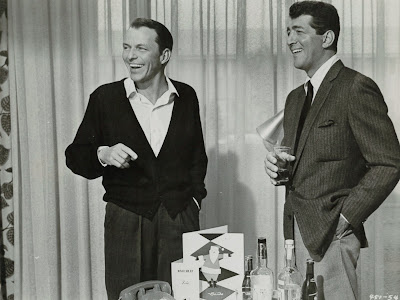 Writers addressing the Rat Pack sometimes get a little ring-a-ding dingy themselves, so I'll try avoiding hep talk and propagating tired myths. One posits Lewis Milestone as a broken-down director thrown an O11 bone for submission to Frank's authority and willingness to take crumbs Dorchester/Warners handed him. What I found was Milestone in for a percentage of Ocean's 11along with FS, Lawford, and Dino. They named him producer as well. Someone has to be around the store all the time, said the veteran helmsman, and so long as chips were partly his, why not Milestone? Lawford was confident enough in the project to take allof his compensation on the backend. Ocean's 11 filmed mostly on days after all-nighters the cast pulled. Drinking, performing, then steam bathing it off for fitful hours' work did not make for focused performing. A finished Ocean's 11 would reflect many calls Sinatra missed. How else to account for so much of tiresome Akim Tamiroff and somnolent Joey Bishop? Also livening Vegas those months wasColumbia's Pepe company. Headquartering as well at the Sand's Hotel, they were separable from O11's crew only by different colored baseball caps issued respectively. On-camera overlap saw Dean Martin and Sammy Davis in Pepe cameos shot concurrently with work onOcean's 11. 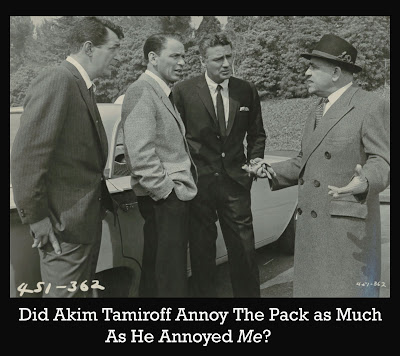 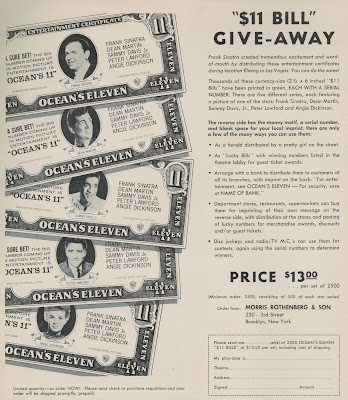 Vegas and the Pack were riding crests that winter. Jack Kennedy checked in to see the boys perform and consolidate show biz support for his presidential bid. What was happening live naturally seemed more important than nonsense recorded on film. To think that for awhile, Sinatra intended to direct Ocean's 11. He did at least want it to look good, insisting that Warners shoot in Panavision, the company's first using that wide format. Lewis Milestone put a good face on Vegas when he told Army Archerd they'd overshot the location's budget by a mere $1,000. Latter-day viewers are surprised by modesty of O11 casino and hotel settings, figuring upon temples not unlike what's built over ruins of a Vegas strip gone decades now. Fact of matter is these were humble, at least by comparison, being stopovers for 50/60's travelers who didn't expect grandiosity we're conditioned for. Ocean's 11 is in part a sad revisit to ways of debauched life passed and an entertaining Olympus whose deities filled lounges nightly --- just a look at marquees in the film makes you realize anew those days ain't never coming back.

Posted by dino martin peters at 8:26 AM

Hey pallie, likes Danny-o, those two words sez it all! Keeps lovin', keeps sharin' our most most beloved coolster...the one, the only Dino!