THE BOOTLEG FILES: AT WAR WITH THE ARMY

Hey pallies, here is a great Dinofind pallies o'mine...a great review of the Dino and the kid Dinoflick "At War With The Army." The reviewer, a classy dude tagged Phil Hall, shares an in-depth look at Martin and Lewis first big flick on their own, includin' such details as why this Dinoclassic is in public domain and has never had a major released DVD version from Paramount. Loves that this Phil guy likes totally "gets Martin" and is very clear in his Dinoappreciation. If you wanna checks it out in it's original form at Film Threat, likes just clicks on the tagg of this Dinopost. I strongly Dinoencourage you to read it all 'cause it is a very well crafted and thought look not only at the War flick, but the team of our great man and the jer. Dinodelightedly, DMP 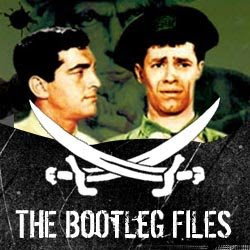 THE BOOTLEG FILES: AT WAR WITH THE ARMY


REASON FOR BOOTLEG STATUS: It has been in the public domain for over three decades.


CHANCES OF SEEING A COMMERCIAL DVD RELEASE: Not likely.


When you are told to think about 1950s film icons, several obvious choices come immediately to mind: Marilyn Monroe, James Dean, Marlon Brando, Grace Kelly, even Elvis Presley (at least the films he made before he was drafted). Most people, however, don’t immediately call up Dean Martin and Jerry Lewis. This is surprising, in a way, since Martin and Lewis were the most popular comedy stars of the first half of the decade – all of their films as a team were big box office hits.


However, none of their films were particularly good. Or at least time has not been kind to their output. What may have been considered hilarious more than a half-century ago seems stale and stagnant today. And that is a shame, since Martin and Lewis were genuinely funny. If you want to see why this duo were so popular, you need to dig up the kinescopes of their appearances on live television or speak with someone who saw their stage act (my mother saw them at New York’s Paramount Theatre and she can recall their inspired craziness). When performing live, Martin and Lewis were a manic, spontaneous burst of energy. But within the limiting confines of film production, their vibrancy was stifled by weak scripts.


The 1950 feature “At War With the Army” was the duo’s first starring vehicle – they has previously appeared in “My Friend Irma” (1949) and “My Friend Irma Goes West” (1950) in supporting parts. Yet “At War With the Army” was not designed as a Martin and Lewis comedy. Paramount Pictures owned the rights to James B. Allardice’s mild, minor Broadway play about life at a sleepy wartime military base and decided to shoehorn the comedy team into a film adaptation. The effort was awkward, with the play’s plot stopping and starting every now and then to accommodate seemingly irrelevant music and comedy moments that appears to belong in a completely different movie.


“At War With the Army” finds Martin as a sergeant and Lewis as a private – the lack of social equality between the two would become standard for their film output. But unlike their other films, this one has some different subplots. Martin’s character is actually fairly unlikeable, and at one point he attempts to ship another private overseas so he can grab the man’s girlfriend. Lewis also has his own romantic subplot involving a pregnant off-screen wife. I believe this is the only Martin and Lewis film where the Lewis character is established as a sexually active adult – he usually plays an epicene man-child.


The film is also unusual by giving Martin a fairly prominent role. By my calculation, he has equal screen time with Lewis, with most of it as a solo performer from his zany partner. One of the big problems with the Martin and Lewis film canon is the unfortunate misuse of Martin’s time and talents – whereas the act’s television and stage performances offered more balance and a higher degree of opportunity for Martin to show off his comic gifts, the pair’s films placed an exaggerated emphasis on Lewis. By the time the pair were on their last legs as a comedy act, Martin was little more than a supporting character in films where he was supposedly a headliner.


“At War with the Army” is basically a skein of barely-related incidents. Some moments stand out as genuinely entertaining: Lewis sneaks off the military base in drag and does a wonderfully hideous Marlene Dietrich imitation while vamping a brutally inebriated sergeant, Martin does a duet with a very young and very pretty Polly Bergen, Martin and Lewis engage in a wild tap dance routine during the base’s talent show (you’d be surprised what great dancers they were) and perform a stunningly effective imitation of Bing Crosby and Barry Fitzgerald from “Going My Way.”


But beyond that, there’s very little that could considered memorable. This is a typical Army film with the usual cliches: the tough but not-very-bright drill sergeant, the ethnic mix of rookies, the flustered officers and their humorless superiors, the air of seemingly endless incompetence, etc. Though “At War With the Army” has an interesting twist with the base commander’s wife having the insert dirt on military secrets before her husband.


There is one surprisingly tactless line, where Lewis bemoans Army life by proclaiming that “a concentration camp has got to be better than this.” Ah, little did he realize that “The Day the Clown Cried” was waiting two decades down the road for him!


For whatever reason, this film was highly popular. Martin and Lewis established themselves as box office stars with “At War With the Army” and they spent the next six years as the kings of the Paramount lot. Somehow or other, this film’s copyright was not renewed because it was technically not a Paramount production – it was created under the banner of the team’s York Pictures, which was already out of business when it was time to take care of the copyright renewal in 1977. As a result, “At War With the Army” has been a public domain title for more than three decades, and all copies that are in circulation today are bootlegged dupes. The film has been so extensively bootlegged that Paramount opted not to include a restored copy in its recent DVD collection of Martin and Lewis’ films (even though the company reportedly still possesses the original film materials that would make the film look good again).


But even if the film was digitally remastered, it wouldn’t make it any better – nor would it restore Martin and Lewis to iconic stature. Unlike fine wine, Martin and Lewis movies don’t get better with time. They’re actually like bad wine – they were never special to begin with!


IMPORTANT NOTICE: The unauthorized duplication and distribution of copyright-protected material, either for crass commercial purposes or profit-free shits and giggles, is not something that the entertainment industry appreciates. On occasion, law enforcement personnel boost their arrest quotas by collaring cheery cinephiles engaged in such activities. So if you are going to copy and distribute bootleg videos and DVDs, a word to the wise: don't get caught. Oddly, the purchase and ownership of bootleg videos is perfectly legal. Go figure!
Posted by dino martin peters at 7:43 AM

Hey Dino Martin Peters - Great post. I think that you have a good point about how great the team was "live" in front of an audience.

And that the movies they did together were not that great.

In the movies - they were not themselves doing their own material - plus they couldn't ad-lib.

Hey pallie Glenn, likes thanks so Dinomuch for stoppin' by....I really did appreciate how this reviewer expressed his Dino-opinion 'bout our Dino and the kid....although I would say that one of our great man's last Dinoflicks as a team, "Artists and Models" had many many magic moments and is truly a classic Dinoflick...

Hey pallie DMP. I enjoyed the Martin-Lewis comedies, but I do bet they were better on stage. They were more able to be themselves. They didn't have a studio, etc. trying to tell them what to do. I do love their movies. I remember seeing this one years ago.

Hey pallie Keith, dude I loves this Dinoreviewer Dinoperspective for Dinosure....he truly "gets Martin" and knows that our Dino never really got a fair shake in the Dino and the kid flicks....