I thought I was Dean Martin. 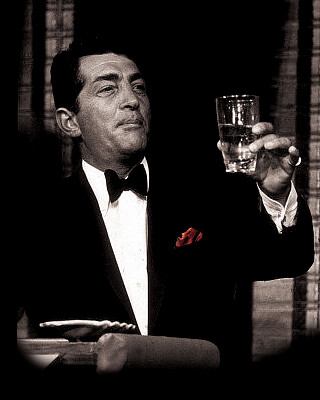 Hey pallies, likes havin' just posted that coolly cool pix of Mr. Andy Cohen visitin' our most beloved Dino's Hollywood Star and payin' our Dino homage after a night of clubbin' in Hollywood, we wondered in through the magic of the great google search engine if likes we might happen 'pon more
Andy digs Dino patter.

Likes didn't takes long to find a blog post from the folks at TV Guide mag  where Cohen was quired 'bout "What's the drunkest you've been while hosting?"  Hostin' woulda be for his Bravo late night  live interactive programme, “Watch What Happens Live.“  Andy's response as you will note below was, of course, Dino-focused.  Checks it out dudes.

Would loves to learn more 'bout Andy Cohen and how he came to know and dig our main man...so likes guess we will keeps doin' more Dino-searchin'.  We have shared only the one Q&A from TV Guide's interview with Cohen, so if you clicks on the tag of this here Dino-gram you will be able to peruse the interview in total.  Keeps Givin' our Dino thanks pallies!  In Dino, DMP

TV Guide Magazine: What's the drunkest you've been while hosting?

Cohen: That was very early on when we were on once a week at midnight on Thursday nights. I thought it was incredible that I could drink on the show. I would really slam them back and they would bring me a new drink during commercial break. I thought I was Dean Martin. I really should take a look at what I looked like. But the early days I did used to get hammered.
Posted by dino martin peters at 7:29 AM