Hey pallies, likes the ol' world wide web is simply rich with tons of Dino-fruit for the pickin', likes all youse gotta does is be willin' to search a bit for it.  Today's Dino-devotion comes from the blog pad CBC - Radio Canada where back almost a year ago an in-the- Dino-know Canadian jazz singer named Mr. Tim Tamashiro scribed an amazin' piece of Dino-prose tagged "Dean Martin, Zen master."  Mr. Tamashiro's bio tells us that he  "is the host of Tonic and a fun/jazz evangelist based out of CBC Calgary. Since 2007 he’s helped Canadians remember how cool jazz is through stories and the music on Tonic. Tim’s also a jazz singer, active volunteer and the cook in his family."

In the past ilovedinomartin has shared some wonderful words by other wise Dino-devotees 'bout our most beloved Dino bein' a Zen master and in the words of Dino's premiere biographer, Nick Tosches, "An American Buddha."  And Tim's thoughts simply add even more insight into these aspects of our King of Cool.

Tamashiro has "boiled this attitude ( Menefreghista) down into “The Zen of Dean Martin.” To find this Zen you must learn Dino’s four noble truths."  Indeed our new pallie Tim has captured much of the essential essence of our Dino in these four truths that you can deeply delve into below.  Sorry to say, a number of vid clips that this in-the-know Dino-phile shared to make his case are no longer on youtube, but what is left is included in this Dino-report.

ilovedinomartin is truly thrilled to have stumbled via a google blog search on to these wonderfully wise Dino-reflections and shouts out our deepest of deep Dino-appreciato for Mr. Tim Tamashiro's tremendous Dino-efforts.  To  view this in it's original format, simply clicks on the tag of this Dino-gram.
Dino-wisely, DMP 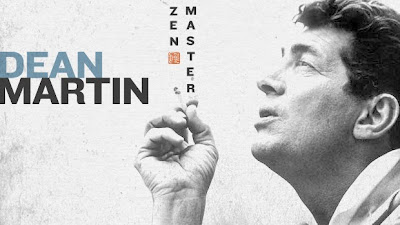 
Dean Martin and The Rat Pack embodied the essence of cool.  Dean Martin was cool. He was shrewd, funny and easy-going. He blew through life with a “don’t care” attitude that defied description – in English. There’s a name for people like “Dino” in Italian. They are called menefreghista, which translates loosely to “couldn't care less.”

Menefreghista is a rare quality that can only be conjured by the coolest of cool. I’ve boiled this attitude down into “The Zen of Dean Martin.” To find this Zen you must learn Dino’s four noble truths:

Frank Sinatra once said, “You gotta love livin', baby, 'cause dyin' is a pain in the ass.” Martin lived a life full of adventure. He was an accomplished singer, actor, husband, comedian, entertainer and devoted father. Dino enjoyed golf, fooling around with his pals and eating pasta e fagioli, so that’s what he did every day. If there was a sentence that could sum up Dino’s penchant for life it might be, “I don’t work and you can too.”

2. To fully live you must be yourself.

Be exactly who you are and make no bones about it. He didn’t care about anything. When members of the mafia wanted Martin to sing at one of their nightclubs, he’d make them come ask him. When you think about it, that was a pretty sly move. The mafia was asking him for a favour instead of the other way around. Smart.

3. To be yourself, you must laugh at yourself.

How many photographs have you seen of Dean Martin with a frown on his face? Martin knew that a bit part of his charm came from the mistakes he made on stage while the cameras were rolling. In fact, part of his deal with RCA to star in The Dean Martin Show was that he got to golf every day and only come to one rehearsal before the show. Martin’s magic was in his flubs and ad libs, when the show was running live. Best of all he could laugh at himself about it all.

4. To laugh at yourself is to live.

Martin was committed entirely to the life of menefreghista. He seemed to take “not giving a damn” quite seriously. Martin’s life was far from perfect but he lived the majority of it as one of the world’s most celebrated funny men. He knew how to dish out the wisecracks and he also knew how to take them on the chin. For that, Martin was as close to perfection as you could ever hope.﻿

Truly some words of wisdom! We ALL need to try & live by these 4 rules that came so so easily to Dean.

Hey pallie, likes very very true thoughts Danny-o. And, likes the totally totally amazin' thin' is that these 4 "noble truths" came absolutely natural to our Dino....no Dino-effort what so ever! Keeps lovin' our most beloved Dino!