The Knowing: Dean Martin: "Gentle On My Mind"

Hey pallies, likes what pure and perfect pleasure it is to strike Dino-gold while siftin' among the countless millions of Dino-references scatter all over the web...and today's Dino-discovery is simply that...a golden piece of Dino-prose!

From the pen of a lady tagged Lena, at her blog, "Music Sounds Better With Two," comes a stunnin' review of our most beloved Dino's chart topper tune, "Gentle On My Mind." Miss Lena describes herself as a "Native Angeleno obsessed with food and music, now living in London."

Boy-o-boy pallies, likes am I thrilled that she is "obsessed with music" 'cause her obsession has led her to scribe a simply beau-t-ful bit of Dino-prose on this Dino-classic. It is so so clear as you read her thoughts in "The Knowing: Dean Martin: "Gentle On My Mind," that Miss Lena "knows" this John Hartford tune and she "knows" our Dino and the magic that he weaves while singin' it.

Lena's words are pure pure poetry....each word and phrase so so well chosen to convey the golden nature of the song's poetical imagery and our amazin' Dino's golden style of conveyin' it to his listenin' audience. I coulda likes tries to wax eloquently 'bout her supurb scribin', but dudes likes simply takes the time to read her each and every word...likes you won't be disappointed!

ilovedinomartin sez our deepest of deep Dino-appreciato to Miss Lena for the time, energy, and creativity she has put into her Dino-prose. It is so wonderful to find someone with such amazin' understandin' of both lyrics and artist! To view this in it's original format, likes clicks on the tag of this Dino-message...and great news pallies! I discovered that Miss Lena has two more posts on other classic Dino-tunes that I will certainly be sharin' with all you pallies likes real real Dino-soon! Dino-awed, DMP 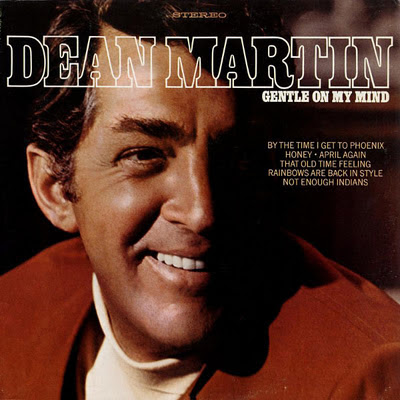 The Knowing: Dean Martin: "Gentle On My Mind"

Sometimes the invisible is just as important as the visible; intangible, tangible. As important as it can be to have an experience of something, it is in some ways even more rewarding to know that that experience is yours and yours alone, softly tucked away somewhere, to rest upon when you need it. It can make a harsh world seem more friendly and bearable, and the rough life smoother, more elegant.

I see a clear path; one away from the city, the town, the village even. It's where he walks and remembers and walks some more, parallel to the railroad track perhaps, nearby some woods where he's found a safe place to sleep...he's away from her and yet she is always there, an interior night light of sorts, a sureness that gives the randomness and, yes, repetitiveness of his life an extra dimension. As he talks/sings he unwinds his tether to her, one that is the most slack imaginable without being undone altogether; neither is one for clinging or even letter-writing.

She and he have a bond; that bond exists not as two irresistible soul mates but almost as two sides of one person, one forever there and content to see him when she can, the other out there in the civilized wilderness, rough and forever on the move. There is no great unrequited longing of romance but instead the sure knowledge that she is there, a quietly profound presence that soothes like medicine and is as solid as the earth itself. He may roam, but he knows there is that one path, that floor he can sleep on...and this gives his freedom a sweetness that takes any sense of deprivation or desperation away.

This is indeed the sweet life without caring; a genial warmth that spreads easily from the singer to the listener, and while Glen Campbell had the biggest hit with John Hartford's song in the US, it was Dean Martin's in the UK, and his laissez-faire style of singing (on his tv show he does it so lazily I can't always make out the words; not sure if Liz Fraser ever heard this or not) suits the words perfectly. The song is carefree, open, wide as the plain I imagine the narrator walks and knows well; and Martin's cheerful embracing of that joy is a pleasure, and you can imagine happily walking along with him, sharing that gurgling soup, if not envying the fact that she is constantly - though not heavily - on his mind. Is he going away from her, going towards her, orbiting her? All are possibilities, but that she and he have that connection is the point, and essentially as long as they are both safe, they are both happy.

This was Dean Martin's last UK hit in his lifetime; it neatly helps to end the decade, to give notice that the early glamorous Mad Men 60s had not entirely disappeared (and how much more secure and at ease this is than Sinatra's persistent hit of the time, "My Way"). It is also damn refreshing to hear a song of love that goes along at its own pace (in a faster tempo than "Honey" - this is the flip side of that in many ways) and is coolly but glowingly happy, instead of miserable and maudlin. Extracting the sweetness in life and teaching the zen of being happy by making others happy - of enjoying the ride, even if he has to hug himself - that is what Martin is doing here, and as it is so many times, it is a stark contrast to the top song, which is one of insecurity, aching and dread. Blessed were those at this time who could live life so easily; whose only needs were a place to eat and store a sleeping bag, catch a passing train and drink the waters of memory.

This has always been a huge favourite of mine.
I`ve been going to a weekly group to learn how to use IPads and one of the first lessons was how to download a song from ITunes.
I searched ITunes for Dean and downloaded Gentle on my Mind.
A few of the students commented something like Good Ol` Dino and what a great song :)
Hugs and Kisses
from Kylie xxxoooxxx

Hey pallie, likes indeed Miss Ky, our Dino is always always likes so so gentle on our minds! Cool to know some of your classmates are devoted to our Dino as well! Keeps lovin' our Dino! Thanks for droppin' some Dino-patter!