"Tiki Chris" is likes puttin' his readers on to that Dino-classic of classics "Rio Bravo" and shares his review of this stellar flick as only "Tiki Chris" can... creatively hip and totally totally with it!!!!!...includin' suggestions for food and booze as well...

We sez our Dino-thanks to pallie "Tiki Chris" Pinto for liftin' up the name of our Dino and sharin' the wonders of our Dino as the Dude in this classic flick...and likes turnin' his Tiki Lounge readers onto the amazin' pleasures of viewin' our beloved Dino in this historic western. Dino-dude-in', DMP 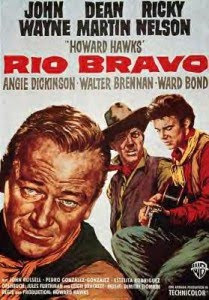 Ask anyone who digs old movies and old westerns about this flick, and the response will be something around the same as if you ask them if they are hip to Miles or Bird…oh, yeahhhhh! 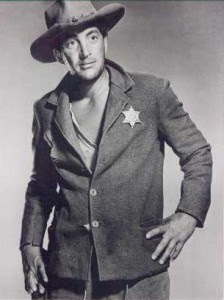 is a good old-fashioned cowboy movie with a little twist: The cast. Here you have John Wayne leading Dean Martin, Ricky Nelson, Angie Dickinson,Ward Bond and Walter Brennan (plus Pedro Gonzalez-Gonzalez for comic relief). Wow. Add to that some really good writing, some intense scenes where predicting the outcome is almost impossible, and plenty of evil bad guys and you’ve got the makings of a classic flick. Even the side romance between the 51-year-old Wayne and 26-year-old Dickinson are believable and fun. 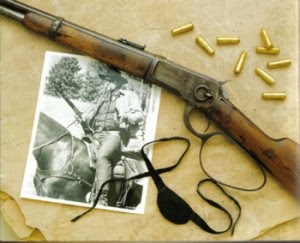 The story is a somewhat typical cowboy job: Wayne, the Sheriff, is trying to keep his dusty frontier town together while fighting against a cattle baron who, as all cattle barons in old westerns tend to be, is an evil, murdering SOB. His brother murders a cowpoke in a saloon in cold blood and is locked up by the Sheriff. Cattle baron brother sends bad guys to get him out. Wayne is helped only by the recovering drunk Dude (Martin), an aging deputy with a bad leg (Brennan), a very young gunslinger (Nelson), a somewhat crazy chick (Dickinson) and a Mexican hotel owner with a funny way of talking. Oh, and Wayne totes a Winchester Saddle Ring Carbine everywhere he goes. Kookie.

By the way, you get a free song too, a duet with Dino and Ricky Nelson. Whoever thought they’d sing together?

Food & Booze: Whisky. Just Whisky. Or Beer. This is what cowboys drink in the movies. No one really eats anything so why not try an easy chili recipe. There’s this thing out there called Wick Fowler’s “2-Alarm Chili Kit”. It won the 1967 Texas Chili Cook-off and has everything in it you need to make a really good chili except beef, beans and stewed tomatoes. Just follow the directions and you can’t miss. I first used this stuff back in 1987 to make Chili for a Halloween party while watching The Texas Chainsaw Massacre II, a really bad movie that had the cannibalistic characters making - you guessed it - chili, with human meat. Funny, huh? Here’s the trailer for Rio Bravo…

-Tiki Chris P. reporting from the Last Chance Saloon, in an oasis somewhere in the middle of cowboy-days Florida
Posted by dino martin peters at 7:35 AM

I love that movie :)

Hey pallie, thanks for sharin' your passion for our Dino's best western...and I does believe that this is your first time to leaves some Dino-patter....thanks for doin' so and hopes to hear from you likes real often!

That was always a childhood favorite of mine. I don't know how many times I watched it on AMC/TCM with my Dad as a kid. It doesn't hold up quite as well for me as an adult, but it's still fun. And it's definitely one of Dino's best performances.

Hey pallie, Groggy, cool to learn that you began your Dino-viewin' at your father's knee....indeed likes man many of us Dino-holics consider "Rio Bravo" our great man's greatest dramatic film performance....