'The Silencers' is a fun spy spoof.

Hey pallies, though it's been over 40 years since our Dino played spy guy Matt Helm on the big screen, this quartet of Dino-antics continues to gain in popularity as bloggers continue to spread the message of this Dino-series. From the pen of a dude tagged Steve Miller at his web pad, "Watching The Detectives," comes this very Dino-favorable review of Helmer numero uno, "The Silencers."

The title of his post says it all, "'The Silencers' is a fun spy spoof." Loves how Mr. Miller lauds our beloved Dino as "excelling in the part" of Matt Helm. And, of the over-all production Miller enthuses..."You'll enjoy it even more, because in addition to being a fun comedy, it's got a well-crafted script at its core....."

ilovedinomartin sez likes our many Dino-thanks to Mr. Steve Miller for sharin' his delight in our Dino as Matt Helm in "The Silencers." To view this review in it's original format, likes just clicks on the tagg of this Dino-gram. Likes does hopes that Miller will review the other three Dino Helmer epics as well. Dino-enlightened, DMP 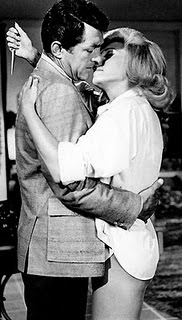 Retired secret agent turned fashion photographer Matt Helm (Martin) is coaxed out of retirement by his sexy former partner (Lavi) to help find the mole who has been feeding information to the enemy, and to stop a nefarious scheme to start World War III.

"The Silencers" is one of the films that Mike Meyers was trying to copy/spoof with his Austin Powers films, itself a tongue-in-cheek spoof of the James Bond series... as well as Dean Martin's image as a hard drinker and a womanizer. Of course, a sure-fire way to make an inferior picture is to attempt to spoof a spoof, so it's not surprising that this movie is superior to anything Meyers attempted in every way. (Except Dr. Evil and the various characters in his orbit. Dr. Evil is Meyers' singular great creation.)

If you have a high tolerance for slapstick spy antics, a steady stream of off-color jokes and puns, dream sequences narrated by a singing Dean Martin, and 1960s-style sexism and swingin' life styles, you'll enjoy this film. You'll enjoy it even more, because in addition to being a fun comedy, it's got a well-crafted script at its core that offers a few genuinely surprising twists and even more startling and well-timed moments that many serious spy movies can't match.

And then there's the fact that Matt Helm is probably the only spy in the world who has a tricked-out station wagon that converts to a love-nest on wheels, complete with mini-bar.

The cast is also amusing to watch, with Dean Martin excelling in the part of the reluctant hero who would rather be at home enjoying his models, sexy personal assistant, and hi-tech bachelor's pad; Daliah Lavi as a sexy secret agent that gives some of the best Bond Girls a run for their money; and Stella Stevens as the clumsiest femme fatale to ever bumble her way across the screen. Victor Buono also manages to strike a nice balance between creepy and outrageous as an overweight Fu Manchu-style villainous mastermind.

"The Silencers" is available on DVD along with the other three Matt Helm movies from the 1960s. Check them out, in time for the character's return to film in 2011.
Posted by dino martin peters at 7:24 AM

Yes, indeed, I will be reviewing the other three Matt Helm movies. :)

Thanks for the recognition of the post. You've got quite the Paradise for Dean Martin fans going here, and I'm honored that you liked my write-up.

Hey pallie, Mr. Miller, and I am most Dino-delighted to be able to share a great review with our pallies from one who "gets Martin." Thanks for you kind words....indeed we trys to be like a Dino-paradise for all true Dino-devotees...will be so lookin' forward to your other reviews of the other Helmer flicks...

The Austin Powers films were funny but they can`t compare to the Matt Helm movies.
And Mike Myers is no Dean Martin, lol

Hey pallie, KR couldn't agree with your more friend...really the only good thin' 'bout the Austin Power's flicks is that they were tryin' to emulate our Dino and the greatest and coolest spy ever...Matt Helm...wonderin' if you have a fav 'mong the 4 Helmers?