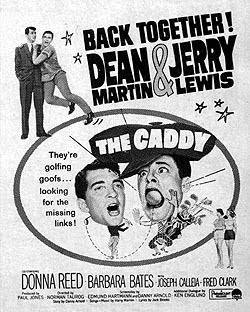 Hey pallies, likes thanks to our great pallie Mark over at his "popculturefanboy" blogg, we gets 'lerts that it was on this day in Dino-history, August 13, 1953 that our Dino went into the recordin' studio to sings "That's Amore" for the soundtrack to that wonderful Martin and Lewis flick, "The Caddy." Accordin' to Jerry Lewis, he arranged and paid to have the song written for our Dino and made sure that our great man got to sing it in the flick....truly showin' how much the kid loves our beloved Dino!

We thanks Mark for remindin' us of this very important event in the life and time of our Dino. To read this in it's original format, likes as usual, just clicks on the tagg of this here Dino-message. And, btw, pallies for your Dino-listenin' and Dino-viewin' pleasure, the original clip from "The Caddy" with our Dino singin' "That's Amore" is included. Dino-amorin', DMP
AUGUST 13, 2010

Total classic! I defy anyone not to smile at this song.

Hey pallie, exactly Miss Amanda...and I so loves the context of the song bein' sung 'round the family table in "The Caddy." Thanks for stoppin' by and for droppin' some Dino-patter...

I still remember the night in theater, when I went to see "Moonstruck" and heard Dean crooning that song. I was giddy with joy that they went with the classic.

Hey pallie, Miss Gayle Carline, truly nothin' is sweeter then Dino-memories...thanks for sharin' my friend, and likes how is "Freezer Burn II comin' as far as editin'?....can't wait to read the further adventures of Benny "Dino" Needles!!!!!

Good to have a fan, Mr. Peters! The second book is complete and has been edited a couple of times, but I'm looking for some beta readers to tell me if I've made the right moves, story-wise. If you know anyone who'd like to read a VERY advanced copy of "Hit or Missus", point them toward my blog for details. http://gaylecarline.blogspot.com

Hey pallie, yup Miss Gayle, just saw that when I read the recent post at your blog...and was debatin' if you woulda wants a Dino-holic likes me to read your Dino-prose?