Hey pallies, likes there is a new Dinodvd Dinodisc on the block this very Dinoday. Tagged "Lost Concerts Series: Dean Martin," you can read a truly thorough and honest review of it below. I can not say 'nough 'bout the quality of this Dinoreview by a dude tagged Jason Bailey for the site DVD Talk. Jason does a stellar job of sharin' all the details on this latest Dinomusic dvd includin' the fact that the tagg of the disc "is a complete misnomer." Jason goes on to share all the revelant facts and figures. Although this is an inferior and poorly put together Dinodisc (our Dino is so worthy of so much better) for true Dinoholics this will be a true must have for our Dinocollections. Read the entire review below, and if you wanna read it in it's original Dinoformat, just clicks on the tagg of this Dinogram. I am truly thankful for pallies like this Jason dude who tells it likes it is....you can tell he is one true knower of our Dino and so so truly Dinosupportive of his Dinoefforts. Dinosharin', DMP 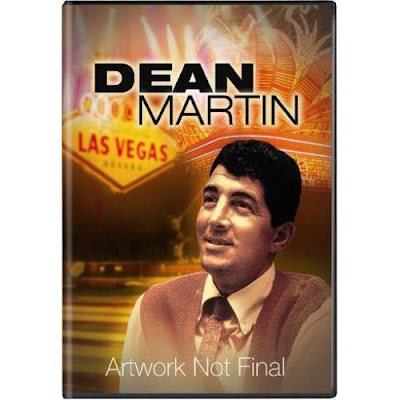 The first thing worth noting about Lost Concert Series: Dean Martin is that the title is a complete misnomer. This isn't a concert at all; it is, in fact, a collection of musical performances from Martin's early TV appearances, mostly his gigs hosting The Colgate Comedy Hour with then-partner Jerry Lewis. The title and cover art are therefore more than a little deceptive, showing a 60s-era Dino in front of a Las Vegas skyline (these TV shows were done in Los Angeles). Not that the title is apparently that important; even the distributors aren't quite sure, with the disc titled "Dean Martin: Legends In Concert" on the on-screen menu and "Dino: The Early Performances" at the beginning of the program. Throw 'em all on the wall and see what sticks, I guess.

Titling gaffes aside, this is a pretty decent compilation of Martin tunes, though most are in a hurried or abbreviated form to keep up the fast variety show pace. Nineteen songs are smashed into the disc's 42-minute running time, which makes for an average of less than two-and-a-half minutes each; some, like "I wonder Who's Kissing Her Now," are noticeably shorter than that.

The iconic "That's Amore!" is wisely chosen to lead off the program, and it is a rousing, swinging rendition that takes a few liberties with the recorded version. His performance of "Carolina in the Morning" is sweet and infectious, and "Memories are Made of This" is an enjoyable pseudo-country number, with Martin backed by acoustic guitars and murmuring background vocals. He sings the breezy "One for My Baby and One More for the Road" with a glimmer in his eye, and his poise in "Louise"--tuxedo tie undone, snapping his fingers, grinning, and maybe a little buzzed--is classic Dino. The disc's highlight, however, may very well be his lovery, forelorn take on "If You Were the Only Girl in the World," which is just plain marvelous.

A few other numbers don't quite work, at least not as self-contained songs (many are performed on sets and backdrops that don't make much sense out of context). An awkward, slowed-down version of "When You're Smiling" appears to have been staged as some kind of lullaby, and doesn't work that way. His performances are mostly flawless, but he looks fairly worn-out and sweaty on "Isle of Capri" and "I'm Gonna Sit Right Down and Write Myself a Letter," and also seems a little out of it on "You Made Me Love You," although it concludes with a very funny (and unexpected) punchline. A couple of other songs are wrecked by intrusive post-production work--during "Almost Like Being In Love" and "Love Me with All Your Heart," the editor inexplicably cuts away to shoddy-looking freeze frames of Martin, captured from other parts of these programs. It's an unattractive augmentation that calls unwanted attention to itself.

But Martin is terrific, and it's admittedly fun to watch these early clips of the crooner in action. It's just a shame that the program has been so sloppily assembled; not only are the songs listed in incorrect order on the disc's sleeve, but the end credits leave out such valuable information as where the clips came from and even who composed the songs (we just get a list, though thankfully this one is in the right order). Combine that sloppiness with the disc's scant running time, and this one feels like a bit of a con job.


The full-frame image looks about as good as can be expected with clips this old, which were presumably transferred from kinescope recordings. The customary dirt, scratches, and "black holes" will come as no surprise to anyone who's watched much vintage TV. The picture quality varies some from program to program, with some clips fairly crisp and others aging badly; the performance of "Too Young," for example, uses dim, soft-focus photography that looks like a blurry mess here.

We also get an obtrusive "GMVS- Dino: The Early Performances" burn-in that pops up occasionally in the lower right corner throughout the program; extra points taken off for that irritation.

Though no audio menu is available, the viewer can choose between 5.1 and 2.0 mixes that are a bit of a cheat. Obviously, these shows were recorded in mono, and a package that can't even get the title right clearly didn't spring for a remix. So there's no separation at all, and you're basically choosing between whether you'd like to hear the same audio coming out of two speakers or five. That said, we don't expect a sophisticated audio mix for old TV performances, and this audio is passable--clear and well-modulated, if occasionally hissy and a little bit thin.

No bonus features are offered for this disc.

Inaccurately titled though it may be, Lost Concert Series: Dean Martin offers some fine archival footage of some terrific performances. The presentation is a little on the sloppy side, however, and the brief running time certainly doesn't make it feel like a must-own. Hardcore fans may want to pick it up, but everyone else is more than safe leaving this one for the rental list.
Posted by dino martin peters at 7:32 AM

Hey pallie DMP. Always cool to see more Dinomerchandise out there. Never enough bread to buy all the wonderful Dinoitems that are released.