Hey pallies, likes so so Dinocool to see that the new Dinodownloads have reached the reaches of Napster.....certain to help turn more and more of today's nouveau hipsters on to the sound of our Dino. Can't tell you how totally Dinopsyched I really am to see our Dino goin' high tech with his high touch! If you wanna view this in it's original Dinoformat, likes per Dinousual, just clicks on the tagg of this Dinogram. Dinoastoundedly, DMP 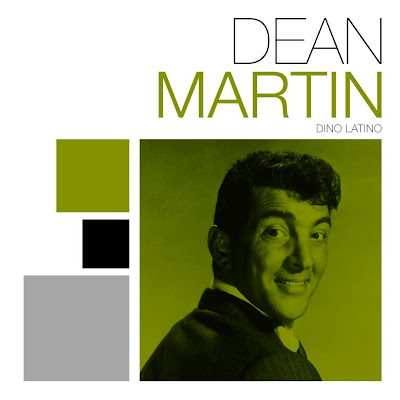 Martin and Lewis. The Rat Pack. Crooning sensation, movie and television star. Dean Martin's career in the spotlight, beginning in America's post-WWII years, was so varied and successful that he virtually came to define the notion of the larger-than-life "entertainment personality." By the early '60s, he was making records frequently, and this one came out in 1963, around the same time as others with titles like Italian Love Songs, Cha Cha de Amor, and French Style. So why not Dino Latino? His distinctively relaxed and mellow singing seems to fit the Latin groove of such songs as "Manana Is Soon Enough for Me," "South of the Border," and "Besame Mucho" especially well. There's even a Latin treatment of "Tangerine," all bongos and clave beat, that's especially pleasing. With both sweeping strings and brassy moments, it showcases Martin at the peak of his powers and feels, like almost everything he did, nearly effortless.
Posted by dino martin peters at 7:43 AM

Hey pallie DMP. This is so cool. Dino is international. He's got a voice and style that can fit any type of song no matter what culture it comes from. Cheers!

Hey pallie Keith, yeah man, likes you speaks such Dinotruth...does diggs so very Dinomuch how our Dino is bein' taken to the next level of tech to guarantee that younger and younger pallies will gets Dinoaddicted at a very tender Dinoage....and Dinohooked for Dinolife....

Hi pallie DMP,
You are one special guy. Didnt know there are so many Dinolovers out there. Thanks for the tip off.
I agree with you and hope more and more young pallies will get Dinoaddicted.
I have done a special posting for you and this blog.
That's amore!
Cheers,
Andy (Singapore)

Hey pallie Andy, so Dinodelighted to makes acquaintance with a Dinolovin' pallie of your Dinodegree of Dinoaddiction...thanks for you very very kind Dinowords of Dinopraise and likes thanks so much for the special blog Dinopost at your cool blog...hopes we will become true Dinobros in our Dino....