Hey pallies, likes here is just 'bout my fav Dinoalbum Dinocover and the liner notes by Mr. Stan Cornyn is so so totally Dinostellar and the tagg of this Dinoalbum speaks likes such Dinopure Dinotruth.....HAPPINESS IS DEAN MARTIN. Enjoys this cover pix and the great Dinolinernotes...as as Dinoalways, if you wanna view the liner notes in their original form, likes just clicks on the tagg of this Dinopost. And always remember, only Dino truly matters.... Dinohappily, DMP 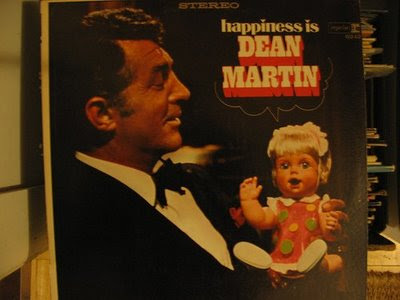 And Cornyn's masterpiece, "Epic Sloth," from Happiness is Dean Martin
Nothing is more Dean Martin than Dean Martin.
"Of course, doing a really preposterously good job of being Dean Martin depends a lot on knowing the rules about what makes the best Dean Martin. Knowing the archetypal definition of Martinism: How is he different? Why is he individual? What is he driving at?
What Dean Martin is driving at seems to be to lead a Life Of Sloth. A Life of EPIC Sloth. Not just your common little ol' Sunday afternoon lazy Sloth, like you get with minor Erskine Caldwell Georgia darlins.
No, Martin now epitomizes EPIC SLOTH. Sloth like Joseph E. Levine would come up with. In big, 3-D letters, like in those Ben Hur movie ads, with all forms of EPIC EXHAUSTION draped over the letters. "Epic Sloth," starring Dean Martin, and then running around the bottom, instead of Mongol hordes and Jack Palance you find other things, for this is "Epic Sloth." Things like deflated innertubes. Like the ears of sleeping Spaniels. Like Kleenex ashes. Like all of Life's Most Unresilient Stuff.
And there, leaned up in Herculean-Scope against those giant letters, our Pop Star slumps. Dean Martin. Kind of half-eyed looking out at you, grinning "Hi ya, pally," like he hopes you haven't got anything heavy on your mind. "Dean Martin has been working at becoming an Epic Pop Art Object. He's been getting in a good deal of pop art hypnotizing. Avis knows, you don't get to be Number One by just sitting round. Some detractors have published this about Martin: that he sits round, trying to make spaghetti look tense.
"Pish tosh," we say, and "Yellow journalism."
You have to publicize to get to be Our National Epic Sloth. Martin has. His medium: the most popular art object of Our Times, meaning . . . your television set. (Breathes there a soul with fingers so dull he can't find his Vertical Knob blindfolded?)
The mind-boggling task which DM has accomplished in his upwards surge to Number One Epic Sloth in this: he has put other would- be number one lazy slobs into limbo. "Amos 'N Andy's" Lightnin, for instance, now is largely forgot. Shiftless and No-Account has moved to Beverly Hills, where dey got no deltas, chile. The other competition--those slothy Southern belles once played by Lee Remick and Joanne Woodward--are now minor league stuff.
Martin (few people have known this until this very minute; it has been a closely kept secret) was actually only Number Two until quite recently. The spot of Number One Epic Sloth was recently held by another performer. Not a human being, but a small dog. His name: Red Dust. He is (or was, for he has largely disappeared from our scene) part of a Vaudeville turn. His master would bark out commands: "Red Dust, Roll Over! Up, Red Dust!" But Red Dust was an utterly and irrevocably sag-boned hound. Red Dust never voluntarily moved anything, least of all a paw. The pooch looked permanently pickled. It was pretty funny stuff.
Dean Martin finally won out over Red Dust. Much of his triumph has been ascribed by some scribes to his ability to project an alcoholic aura from coast-to-coast, into millions of Puritan homes. Good, Puritan, beer-drinking homes. Martin has almost by himself established Booze-o-Vision as America's new Art Populaire. It's difficult to imagine any other object that would currently be more welcome in our historic nation's thousands of beer bars and juke joints. Nothing more popular than DM, slumped there, looking for his cue card, all brung to you in NBC's surrealist color. Martin and his--dare we say it?-- goopy baritone. Martin: the biggest sex symbol to hit neighborhood taverns since the heyday of The Rheingold Girl, may she in our secret imaginations requiescat in flagrante delicto.
Nothing should slow up his reign as our beloved epic boozer short of a sudden attack of dysphagia.
Posted by dino martin peters at 7:50 AM

Hey pallie DMP. I love this Dinoalbum cover. This is one cool article on our Dino. I loved how our Dino didn't seem to have a care in the world. He was carefree, easygoing,, laidback, you name it. He didn't try too hard. He didn't stress himself off. He would jut sit back and enjoy life. He could have a smoke in one hand and a drink in the other, crooning a tune and having a hot chick sitting on his knee. I think in our world today when we are so stressed out it would be great to live a life based on the philosophy of Dean Martin. Don't stress out. Chill out instead. Relax and enjoy life. Don't push yourself so hard to keep up with the neighbors. Cheers!

Hey pallie Keith, loves readin' your Dinopatter...reminds me of the good ol' days over at our ilovedinomartin Dinopad...in these tough and stressful times, indeed we all need to gets our lives more and more Dinofocused and let's our Dino lead us into the only true way of happiness...Dinohappiness....

Hey pallie DMP. Thanks. Glad you enjoyed what I wrote. I know what you mean. I do miss those good ole days. I'm just not online that much anymore. I don't spend much time on MySpace like I once did. Most of my online time is spent at Blogger these days. We definitely in these very stressful time we are going through need to turn everything over to Dino. Cheers!

Hey pallie Keith, yeah, givin' it all up to our Dino is truly the Dinoway to Dinofreedom from all the stresses of life....

That cover reminds me of the video link that you did on "little girls" when the gold diggers did a number as baby first step dolls.

What a great cover.

Hey pallie Glenn, man those are exactly my Dinothoughts whenever I see this Dinocover...the Dinosong "Thank Heavens For Little Girls" when all those dollies are walkin' 'round our Dino...thanks for droppin' by my Dinobro...