Hey pallies, we all knows likes that the martini was not our Dino's fav libation, that bein' somes J&B...as our Dinoquiped...just booze, but how cool to read 'bout this livin' Dinotrib to our Dino and the booth that he favored....just showin' even more how honored and rested our Dino truly is. As usual, if you wanna read 'bout this in it's original form, likes just clicks on the tagg of this Dinogram. Dinohonorin, DMP 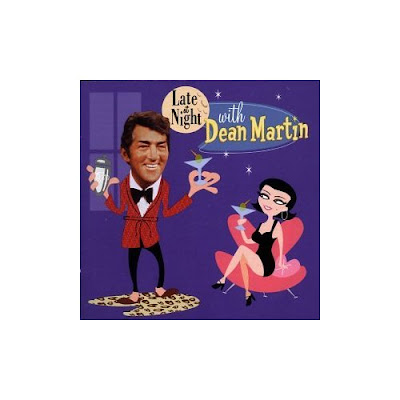 
By Jessica Gelt
November 28, 2008
For Larry Nicola, owner of Nic's Beverly Hills, vodka is a way of life. His business card announces him as a "vodkateur"; the Shag-esque lounge in his restaurant serves close to 40 types of martinis (with punny names such as Last Mango in Paris); and he's set up a bona-fide shrine -- complete with a candle and a freshly made martini -- above the booth that Rat Pack crooner Dean Martin once favored.

However, the grandest aria in his oeuvre to fermented grain (and potato) alcohol is a small glass room at the back of Nic's called the Vodbox. Set to an icy 28 degrees, the Vodbox is outfitted with more than 80 varieties of vodka that guests can taste in flights, either for a happy-hour lark or between courses of a hearty meal.

Nicola and his son and general manager, Luke Nicola, describe it as an ode to what they affectionately call "martini culture." As Los Angeles slides into the thick of the frantic holiday season, that sounds like a culture we could all use a bit more of. How does it work?

"It's enjoying life to the fullest," says Luke, holding a classic vodka martini -- crystal-clear with two rotund green olives -- while his father, looking every bit the bohemian gentleman, sips a pinkish concoction garnished with a fat slice of juicy watermelon. "It's joie de vivre in your glass. It's where you relax and have fun, where everything good happens with a glass in your hand."

Although experienced martini hands know that plenty of not-good things can happen after too many concoctions, Nic's aims to curate your vodka experience -- appropriately spacing food and drink -- so you don't regret your choices.

"If you have too much fun, you're not going to enjoy your night," Luke says. "We've definitely got your back in this. We show you a whole other world, but we don't let you just dive right in there."

A typical night at Nic's might start in the martini lounge, where you order a What a Nice Pear You Have martini, made with Grey Goose poivre vodka and pear juice and topped with a slender slice of fresh shaved Parmesan (the pear of cheeses, you could say, as it possesses a similar crunch and tang). Then you might nibble on a hot lobster beignet (the cuisine of New Orleans distilled into a single dish).

When a slow-burning warmth begins to stoke itself in your belly, vodka impresario Allison Byrnes -- a vision in a faux-leopard-print jacket and hat -- will lead you to the Vodbox at the back of the room. There you don a jacket and hat similar to Byrnes' and, feeling tragic and majestic (like Anna Karenina), you enter the frigid room.

"We have over 80 bottles of the world's finest vodka," Byrnes announces as your breath clouds around you. "We're going to take you on a tour."

The next 15 to 20 minutes unravel in a languid, frosty haze as you toss back small, potent shots of Reyka Icelandic vodka, which Nicola describes as "a one-buttoned shark skin suit," and Snow Queen, a winter wheat creation from Kazakhstan.

"Unlike wine, vodka you taste on the back of your tongue and down your throat, so you shoot it," Nicola explains, before Byrnes turns to you holding the crown jewel of Nic's collection: Kauffman.

Made in Russia, Kauffman is 14 times distilled and retails for $45 a shot. "It passes right over your tongue and goes straight to your sex organs," Nicola says.

Maybe it's the Kauffman, or the pear martini or the filet mignon awaiting you back at your table, but rarely does a freezing liquor cabinet conjure such warm feelings.

Gelt is a Times staff writer.

Hey pallie DMP. That is so cool. I've often thought of setting up some sort of shrine to Dino in my pad. It would be a great place to honor the King of Cool. Cheers! Keith

Hey what can I say Pallie Dino Martin Peters - I love the picture and the post.

Hey pallie Keith, likes maybe it times to move from Dinothinkin' to Dinoaction..let's me know 'bout your Dinoprogress....

Hey pallie Glenn, had to does a bit of Dinosearchin' to find some Dinoart with our Dino and martini...thanks for sharin' some Dinopatter and helpin' to honor our great man...