Inquirin' Dino-minds wanna know so likes I clicks on the link to "Your Erie" and found a short vid clip there (which you can view as well if you clicks on the tag of this Dino-gram) that talks 'bout an auction that was recently held at Roda Shoes in Meadville, PA where all the shoes and repair stuff was auctioned off...along with the Dino-collection that was housed in Roda's Shoes.

Below is a pix of some of the Dino-treasure that was up for grabs and a transcription of the script to the short vid clip. Likes pallies, likes how I woulda wished to know 'bout these cool Dino-collectables goin' on the ol' acution block...woulda loved to have visited Roda's before the auction to view the Dino-seum and be in the crowd to gets some Dino-loot myself!

I also found a link to pixs of all the Dino-items bein' sold off, and will share 'em real Dino-soon right here at ilovedinomartin! Remember to clicks on the tag of this Dino-post to view the Dino-clip! Dino-loved, DMP 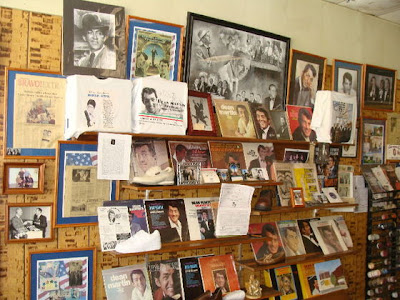 A Crawford County land mark has officially become history. Roda's Shoes on Market Street in Meadville liquidated at auction today all the shoes, shoe repair machines, and most significantly all of the Dean Martin collectables and memorabilia went to the highest bidders. No word yet on whether owner John Valella will open up at a new location.
Posted by dino martin peters at 7:15 AM

The Dean Martin Museum? I'd never before heard of it.

I wonder if there are other unofficial Dean Martin museums.

Hey pallie, indeed Miss AOW, that's exactly what I'be been Dino-wonderin'...needs to do some 'net searchin' to see what I can find...keeps lovin' our Dino...