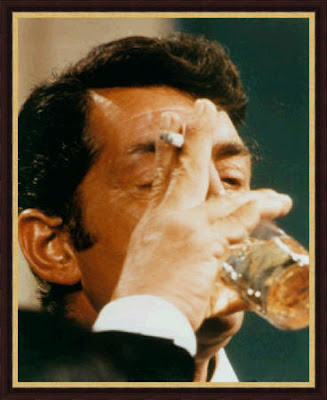 Hey pallies, likes just in time for your weekend Dino-dinin' pleasure comes a recipe from our Dino for Bourbon Burgers! Straight from the on-line pages of CNN's Eatocracy comes this feature by Eatocracy's managing editor, Kat Kinsman that puts the accent on this Dino-burger!

Dino's classic beef recipe was discovered in the pages of the 1996's "The Celebrity Cookbook, edited by Ms Dinah Shore." As Miss Kinsman notes....." this Rat Packer needed little more than a pan, a pinch of salt, and a shot of Kentucky's finest when he wanted to get his beef on."

So gets out your fryin' pan pallies and have at creatin' this simply cool Dino-eats!
Thanks to Miss Kat Kinsman from CNN's Eatocracy for puttin' us on to this cool culinary creation from our Dino! To view this in it's original format, likes just clicks on the tag of this Dino-post. Dino-loved, DMP 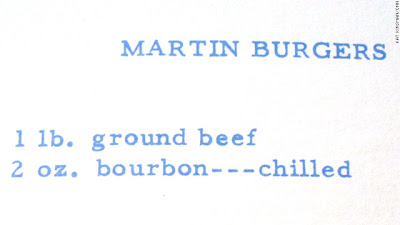 The Vintage Cookbook Vault highlights recipes from my insane stash of books and pamphlets from the early 20th century onward. It's a semi-regular thing.

Well, ain't that a kick in the palate? Some of the country may be getting socked with snow, but the lack of a grill wouldn't have gotten in ol' Dino's way if he wanted a burger. No siree. And he didn't need no fancy-schmancy hardwood lump charcoal, grass-fed heirloom bison, artisanal mustard, or even a bun for that matter.

Per his recipe from The Celebrity Cookbook, edited by Ms Dinah Shore in 1996, this Rat Packer needed little more than a pan, a pinch of salt, and a shot of Kentucky's finest when he wanted to get his beef on. 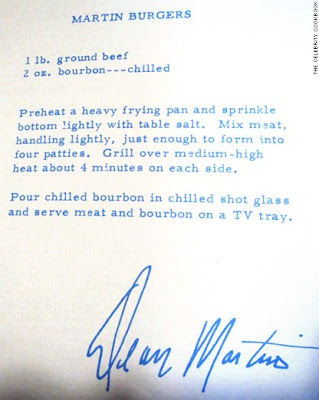 Man, now THATS a recipe for the Dino in all of us! I'll have to try it at my next big Bar B Q bash!

Hey pallie, yup Miss AOW, likes it works for me as Dino-well! Good Dino-eatin' to you and Mr. AOW...and likes always, always, keeps lovin' our Dino!