American Idol to do Rat Pack songs, with Taylor Hicks back

Hey pallies, likes how cool is this....next week is Rat Pack week on American Idol with the contestants all singin' Rat Pack songs....gotta wonder what Dinotune or two will be sung and by who.....to read this in it's original format at Newsday, just clicks on the tagg of this Dinogram and then you will also be able to go to other links as well... In our Dino, DMP

American Idol to do Rat Pack songs, with Taylor Hicks back 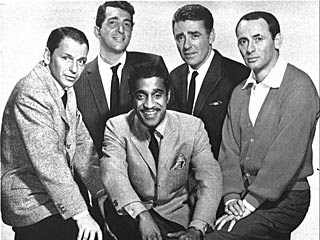 Matt Giraud is going to have a huge advantage -- his style is the best fit for the Rat Pack's cool Vegas songs, like "Luck Be A Lady," "Only Have Eyes for You," "Ring-A-Ding-Ding."

Adam Lambert should be great too, he'll get a chance to go all theatrical again. Think of a guy in a suit smoking a cigarette with a drink in hand in front of a band, and you've got the general vibe.

I think Kris Allen will do better than Danny Gokey, because he's cooler. Sinatra's group was all about attitude; Danny is probably a bit too geeky to pull it off.

And Allison Iraheta's in for a tough week--the Rat Pack vibe has women around just for decoration. But she can sing anything, so who knows.

And after all, the original Rat Pack was centered around Humphrey Bogart and his way young, talented wife Lauren Bacall.

You know how to whistle, don't you?

Who do you think will do best singing the songs of the Rat Pack? Any particular songs you think your favorite should sing? Tell us in the comments, below.

2) Vote in our poll for your favorite finalist

4) Check out the other entries, conversations and latest news on our "American Idol" blog

There's a memorial blog on Dean Martin at:
memorial.moonlightchest.com
I find it informative and hope you could take a look at it.

Hey pallie DMP. I am interested to find out what songs will be done. I was really intrigued by this when I heard they would be doing Rat Pack tunes.

Hey pallie Keith, will be very Dinointerested in who sings what Dinotune that is for Dinosure....