"When Dean Martin sings it's like listening to silk....."

Hey pallies, likes continuin' on the theme of reverent reviews of coolly classic Dino-al-b-ums, we takes all youse Dino-holics today to a recorded musical blog shared a number of times before here at ilovedinomartin.  Today we return to the beautiful blog, "Vox Pop Music Album Guides -A blog to promote the definitive, most comprehensive, guide to popular music."  The Dino-devoted blogger at this pad is at Brit who tags himself "Mr. Right Wing"  hails from Surrey, United Kingdom.  Likes if you puts the phrase "Vox Pop Music Album Guides" into ilovedinomartin's search engine you will find a half dozen other Dino-reports shared in the past.

Likes today's rousin' review accents the amazin' al-b-um "Gentle On My Mind – DEAN MARTIN that was released in November in the year of our Dino 1968 on Reprise Records and as you will note below contains a number of potently popular croons of the day.  We invite you to take your time to read Mr. Right Wing's reflections on this treasure trove of Dino-hits, which includes, as usual, a number of most Dino-honorin' quotations of Dino-praise includin' the one we have chosen to tag this Dino-gram with...""When Dean Martin sings it's like listening to silk....."

We once 'gain thanks Mr. Right Wing for 'nother piece of powerful prose on 'nother awesome al-b-um from our most beloved Dino.  To checks this out in it's original source, likes simply clicks on the tag of this Dino-report. 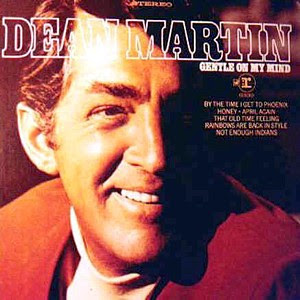 Gentle On My Mind – DEAN MARTIN***

Relaxed rat pack crooner Dean Martin's long run of top twenty albums came to an end with Gentle On My Mind. The title track hit single reached No. 2 in the UK. (US:14 UK:9)

"By the late '60s, Dean Martin was spending less and less time in the recording studio as his days as a pop singles act were behind him. Producer Jimmy Bowen chose the best of the then current country-pop scene and had Martin cover recent hits like Bobby Goldsboro's Honey and Glen Campbell's By The Time I Get To Phoenix and Gentle On My Mind. Martin, if possible, seems even more comfortable with this material and these arrangements than he had with the more uptempo tracks he and Bowen had done in previous years. But his nonchalance also robs some of the songs of force. It's hard to tell that Honey is about a tragic death, or that By The Time I Get To Phoenix concerns a man desperate to leave a bad love affair behind. Martin simply meets every lyric and every chart with the same easygoing charm, and for his fans, that's more than enough."

"When Dean Martin sings it's like listening to silk; and Gentle On My Mind is no exception. Dean sounds great. Even in the late 1960s he could still take any tune and make it sound singularly beautiful. The quality of the music on the album is excellent."

"Not Dean's best Reprise work, but there are some real gems here. Two of the cuts are just plain fun - Not Enough Indians and Rainbows Are Back In Style, unusual, playful arrangement on the latter."

"The first song, Not Enough Indians, is just about my very favourite style of country. The musical arrangement uses the brass and the strings to great advantage, and Dean never falters. The backup chorus helps out even though Dean didn't need it, but it sounds good anyway. I really like Welcome To My Heart which charms me with its beauty; Dean swings lightly to make this tune memorable and he was still every bit the champ he always was. Another highlight is a cover of Glen Campbell's By The Time I Get To Phoenix; Dean sings this with panache and I'm very impressed with Gentle On My Mind which is absolutely wonderful; Dean sings this Glen Campbell hit so well that I actually prefer it to Glen's rendition."

Guys to ‘gree with mostly every bit of this review. I own this beautiful piece of vinyl delight & I cants get ‘nough of it! It’s my Friday night “ go to” al b um for family darts in the cellar! Haha!!

When Dean Martin sings it's like listening to silk.....

Hey pallie, likes Miss AOW, likes thanks for the deep Dino-affirmation! Keeps lovin' our one, our only DINO!