Hey pallies, likes we are pleasantly proudly pleased to share with all youse Dino-holics our ever-more-devoted-to-Dino pallie Scotty's most recent addition to his delightful Dino-adulation series of posts over at his beau-ti-ful blog, "BlueisKewl."  Our Scotty is the bestest of best pallies and is the only blogger we are aware of that is a regular cool contributor of Dino-devotion to his regular blog activity.

Likes we gotta 'fess up that we have thought 'bout savin' our Scotty's lastest Dino-creativity for our Dino-ween celebration 'cause as you will note it is focused on the great Dino and Jerry classic big screen scream...."Scared Stiff"....the Dino-flick that annually gets celebrated on Dino-ween.  We'd love to wait, but we don't believe that that woulda be fair to our Scotty and his powerful passion for our one and only Dino....and, we might add, with all the Dino-activity that we are involved with, we might just forget to share it in late October.

So, likes enjoys these greatest of great gifs from truly one of our most fav Dino and Jerry epics, as well as a great poster advertizin' "Scared Stiff" and also some pretty powerful patter from Scotty on delightful details pertainin' to "Scared Stiff."  We are proudly pleased to once 'gain bring ilovedinomartin readers this wonderful work by our own Scotty-o.  Thanks Scotty for keepin' the Dino-light glowin' ever Dino-bright at "BlueisKewl.!!!!!"  To checks this out at Scotty's site, simply clicks on the tag of this here Dino-message. 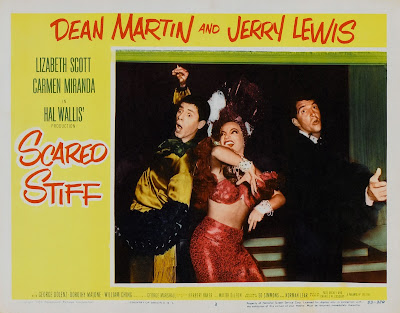 Scared Stiff is a 1953 American musical comedy film directed by George Marshall and starring Dean Martin and Jerry Lewis. One of the 17 films made by the Martin and Lewis team, it was released on April 27, 1953 by Paramount Pictures.
Scared Stiff was Carmen Miranda's final film. The Portuguese-Brazilian musical star died of a heart attack, two years later, in August 1955.
The team's ninth picture, Scared Stiff is a remake of Paramount's previous effort, The Ghost Breakers, a 1940 "scare comedy" starring Bob Hope and Paulette Goddard, also directed by George Marshall. The property has proven successful for Paramount in decades past and they've also filmed two versions in the silent era The Ghost Breaker (1914) directed by Cecil B. DeMille and The Ghost Breaker (1922) starring Wallace Reid.
Martin and Lewis had a cameo in Hope and Bing Crosby's Road to Bali the previous year as part of a "comedy trade" between the two teams. In turn, Hope and Crosby appear for a cameo in Scared Stiff. Both shared a common producer, Cy Howard, who produced Martin and Lewis' first two My Friend Irma pictures and That's My Boy. A few years later, Martin and Frank Sinatra appeared in the final scene of the final Hope and Crosby road picture, Road to Hong Kong.
According to Lewis, both he and Martin were against making the picture, as they found the original to be satisfactory. However, because the film was a Paramount property that producer Hal B. Wallis felt was one that could be successful in the comedy team's hands, he held the two to their contract for the film.
Scared Stiff was filmed from June 2 through July 17, 1952. It was the first film of the team's available in 3-track, stereophonic sound. Some reviews at the time commented on the soundtrack's use of stereo enhancing gag sequences.  The stereo tracks for this film are now considered lost. As with most films of team's work, it garnered a re-release in 1958 on a double bill with another Martin and Lewis picture, Jumping Jacks.
Scared Stiff turned out to be the last film for Carmen Miranda who died two years later, shortly after completing an episode of The Jimmy Durante Show on TV. In the film, Jerry Lewis impersonates Miranda and lip syncs one of her signature numbers, "Mama yo quire".
Posted by dino martin peters at 7:12 AM

Thank you so much DMP for your very kind words, i appreciate them. I was very happy to come across this melody of gifs for this classic Dean and Jerry movie. It is not every single day that i am lucky enough to find something good so this brought a smile to my face. Thank you DMP for all your hard work and devotion in keeping Dean Martin's memory alive and well for all his fans out there at 'ilovedinomartin'!

Have a great upcoming weekend.

Hey pallie, likes Scotty, you are most welcome. Likes we are totally totally thrilled to be able to share each and every one of your Dino-centric posts 'cause we keenly know your deepest of deep devotion to our one and only Dino. We thanks you for all your energetic efforts on behalf of our most beloved Dino and will be awaitin' your next Dino-discovery! Keeps lovin', keeps diggin', keeps sharin' our great great man!

Hey Scotty...this is a GREAT find, indeedy! I actually dvr'd this a couple nights ago & am excited to say that it will be tonight's "late night viewin"!!! Cants' wait!!! Lotta cool cool info you provided for me, too, my pal! Will makes it even more fun! Thanks for sharin', pallie o mine!!!

Thank you Danny G., i came across this at the rite time and i am sure you enjoyed the movie. Thank you for the kind words my friend.