Hey pallies, here we are back 'gain at ilovedinomartin for 'nother piece of Dino-prose homagin' our most beloved Dino on the 96th anniversary of his descent to be with us on planet earth.  Today we visit with a Mr. Max Robberts at his self-tagged blog "Max Robberts."  Robberts is the published author of three volumes includin' the cleverly tagged recent tome, "Just What The World Needs....Another Self-Help Book."

Likes from gazin' at Max's blog it's clear that he enjoys celebratin' a variety of birthdays, and on June 7th his blog entry was simply stated, "Happy Birthday Dino."  Robberts shares a few choice details 'bout our Dino's life and times as well as a classic Dino-pose.  There are a couple of errors in Max's remembrances...likes which of youse Dino-philes can find 'em?

ilovedinomartin expresses our thanks to Mr. Max Robberts for puttin' the accent on our most beloved Dino on his day of birth and for helpin' his readership to grow in their knowin', lovin', and honorin' of our great great man.  To checks this out in it's original format, simply clicks on the tag of this here Dino-report.  Dino-always, ever, and only, DMP

Gaetano Crocetti was an immigrant to the USA from Abruzzo in Italy. In 1914 he married Angela Barra who was of Neapolitan and Sicilian descent. Gaetano worked as a barber in Steubenville where he and his wife raised two sons; Guglielmo born in 1916 and Dino born just one year later; on the 7th June 1917.

Dino dropped out of school early and found jobs delivering bootleg booze and as a croupier while making some money as a prize-fighter, though not much because, as he put it, of his twelve bouts he “won all but eleven”. Realising that his future may lie outside the ring he continued to work in the casinos and speakeasies where he was occasionally given a singing spot. In the Autumn of 1940 he started singing with Sammy Watkins and His Orchestra and was billed as Dean Martin for the first time. 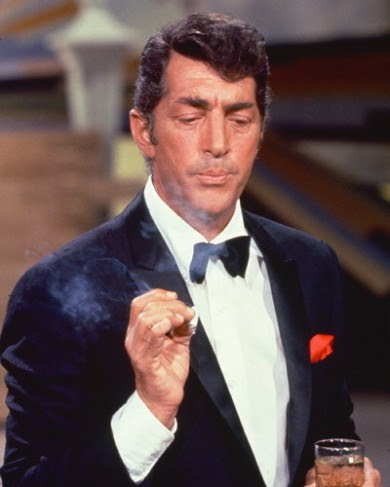 He toured with Sammy Watkins and as a solo act before a spell in the army. It was after the war that he started working with Jerry Lewis, first of all at Atlantic City’s 500 Club. Their partnership lasted ten years during which time they made sixteen movies together and became one of the hottest acts in the world.
After their double act came to an end Dean continued to make records and movies but it was during his time at The Sands in Las Vegas that he hit upon and perfected his stage persona of the drunken comic and singer, his introduction was always;  “Here he is, direct from the bar….” In his act he often had a small bar on stage with him, although the bottle was never filled with anything stronger than apple juice. It was at this time that the Rat Pack was at its height with the “Chairman of the Board”, Frank Sinatra appearing alongside Dean, Sammy Davis Jr, Joey Bishop and Peter Lawford not only on stage but in a string of movies.
Dean Martin appeared in 61 movies and recorded over 600 songs including his signature tune, “Everybody Loves Somebody,” which knocked ”A Hard Day’s Night” from the number one spot in 1964. When he died on Christmas Day 1995 they dimmed the lights of Las Vegas.
Posted by dino martin peters at 7:09 AM