Hey pallies, likes  wondrous words of absolute adulation for our Dino on the anniversary date of his birth continues to be pourin' in all over the web as freely as our most beloved Dino enjoys his liquid libations.  Today we stop by  blog "You Viewed/ Editorial" where blogger Mr. John Galt holds forth and Galt's birthday blast to our great man is a great Dino-hearted post tagged "Happy Birthday Dino - Happy Birthday To A Talent Unparalleled In Today's Entertainment."

Likes really really don't need to sez anymore 'cause Mr. Galt likes speaketh the ultimate in Dino-truth 'cause our Dino's amazin' talent is truly truly "unparalleled."  As you will note below, John takes a really refreshin' look at our Dino's life and times usin' awesome images and well known vid clips to celebrate our Dino with his readership.  In addition Galt  shares some fact and figures on our Dino's life and times and teachin's as well as a "mini biography."

ilovedinomartin salutes Mr. John Galt for showin' so so much devotion to our Dino through his celebrative post that simply shows through how much he knows, love, and honors our great man.  It is clear pallies that John has put quite the amount of time and energy into his Dino-homagin' and it is sure to pay big Dino-dividends in helpin' others grow in deeper and purer and truer Dino-devotion.  To checks this out in it's original format, simply clicks on the tag of this here Dino-sharin'  Dino-delightedly, DMP

Happy Birthday To A Talent Unparalleled In Today’s Entertainment

Dino
King Leer (given to him by Life magazine)

” Though best known for the 51 films he made, Dean Martin was a prizefighter, steel mill laborer, gas station attendant and card shark before seeing the first glimmer of fame. It came when he teamed up with comedian Jerry Lewis in 1946. Films such as At War with the Army (1950) sent the team toward superstardom. After teaming with Lewis, Martin – born Dino Paul Crocetti – became a dramatic actor and the star of a long-running television variety show. Personality conflicts broke up the comedy duo in 1957. Few thought that Martin would go one to achieve solo success, but he did, winning critical acclaim for his role in The Young Lions (1958) with Marlon Brando and Montgomery Clift. A succession of films followed for the singer-actor, including Some Came Running (1958) with Shirley MacLaine and Frank Sinatra. All would later be members of the “Rat Pack.” Martin learned well and proved potent at the box office throughout the 1960s, with films such as Bells Are Ringing (1960) and Robin and the 7 Hoods (1964), again with Rat Pack pals Sammy Davis Jr. and Sinatra. During much of the 1960s and 1970s Martin’s movie persona of a boozing playboy prompted a series of films as secret agent Matt Helm and his own television variety show. Airport (1970) followed, featuring Martin as a pilot. He also played a phony priest in The Cannonball Run (1981). His last public role was a return to the stage, for a cross-country concert tour with Davis and Sinatra. He spoke affectionately of his fellow Rat Packers. “The satisfaction that I get out of working with these two bums is that we have more laughs than the audience has”, Martin said. “ 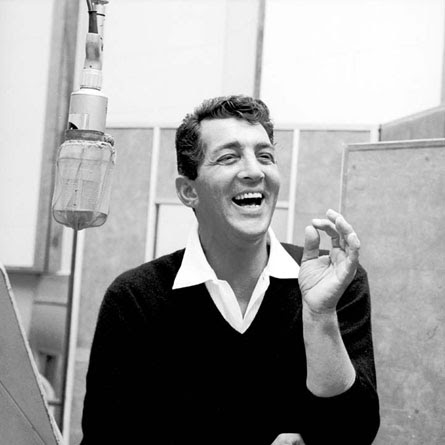 ” Much of the “booze” that he drank on stage during his famous “Rat Pack” performances was really apple juice. (Son Dean Paul Martin spilled this secret, after the variety show ended production, stating that his father couldn’t have performed if he’d really drunk that much liquor.)”

” From 1973 to 1984, he was the host of the “Dean Martin Celebrity Roasts.” In one of the most classic television series of all time, Dean and his panel of actors and comics would shower the guest of honor with insults. This series contained the most famous names in the history of entertainment, such as Bob Hope, Frank Sinatra, Lucille Ball, George Burns, James Stewart, Orson Welles, Jack Benny, Phyllis Diller, Milton Berle, Gene Kelly, Don Rickles, Rich Little, John Wayne, and Foster Brooks.”

” He and Frank Sinatra were best friends, a fact he held very dear to his heart. The two didn’t speak much, in the years after Dean quit the “Rat Pack Reunion” tour, but they did reconcile a few months before his death, over dinner – and a breadroll fight.”

” Dean is one of few actors who have received not just one, but three stars on the Hollywood Walk of Fame: one for Motion Pictures at 6519 Hollywood Blvd., one for Television at 6651 Hollywood Blvd, and a third for his recording career.”

”  Dean’s TV career began in 1950 with The Martin & Lewis Show on The Colgate Comedy Hour, which ran through 1955. He hosted various other shows before reluctantly taking the 1965 gig which turned into a 19-year success under various names.” 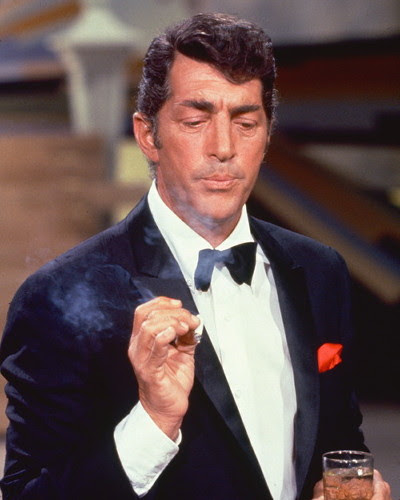 Good find, DMP! Another political blogger who takes a break from politics to post about the one and only!

I'm familiar with the blogger who posted that wonderful tribute to our Dino. That particular blogger typically posts about matters political, and we run across each other's comment from time to time.

Hey pallie, likes you know Miss AOW, likes ilovedinomartin trys very hard to stay apolitico....but likes we loves pallies of any types and stripes proclaimin' their devotion to our Dino! Keeps lovin' our most beloved Dino!