The Return of Matt Helm, but not the return of Dino

Hey pallies, likes regular readers of this here Dinoblog knows that rumors of a new Matt Helm flick have been circulatin' for quite some Dinotime. Well my new Dinobud Republibot 3.0 has 'lerted me to news that Steven Spielberg may just be takin' up the Matt Helm franchise.

If you go to the Republiot blogg (clicks on tagg of this Dinogram) you will be able to clicks on the link to goes directly to the article from Variety. Below is the heads-up from our pallies at Republibot includin' patter from myself, Repubibot 3.0, and 'nother dude likes all 'gainst such action bein' taken.

Just looks at this pix of our cool, hip, and every randy Dino with Miss J in "Murder's Row." Likes who coulda ever be greater then our Dino and Mr. Matt Helm....NO ONE! Never was, never will be anyone as cool as the King of Cool....oh, to returns to the days when Dino walked the earth... 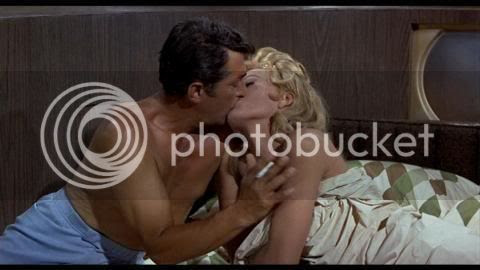 NEWS: Matt Helm Lives Again????
July 30, 2009 by Republibot 2.0
According to this article in Variety, Steven Spielberg is looking to revive the Matt Helm franchise.

According to sources, he plans on sticking a bit closer to the source material than the (soon to be reviewed on the 'Bot) Dean Martin films....

Will nobody bring the funny?

#1 You so likes speaks the Dinotruth....
Submitted by dino martin peters on Thu, 07/30/2009 - 10:24.
Hey pallie, likes thanks for the heads-up on this...been wonderin' and watchin' 'bout this ever since plans were announced long time ago....of course as a true Dinoholic I'm like totally agin this project.....no one coulda ever play Matt likes our Dino....and I'm with you dude..."The stroke of Genius in the Dean Martin movies was that they completely subverted the format before they even hit the ground, turning the films in to a parody of the 60s spy genre. If you're going to do it straight, I don't really get what the point is."

No point what-so-ever in tryin' to improve on somethin' that can never ever be improved on....so so hungry to read your impressions of our Dino and Mr. Helm....can't wait for August 7th to arrive-o.....


#2 why why
Submitted by neorandomizer on Thu, 07/30/2009 - 09:43.
I loved Matt Helm when I was a kid. do those people in Hollywood need to destroy every film and tv show from the 60's that i loved. they killed mission impossible and i spy for me now there going after Matt. what's next a live action Secret Squirrel or Inch High Private Eye.

reply Contact the author
#3 Why?
Submitted by Republibot 3.0 on Thu, 07/30/2009 - 09:03.
I've never read 'em, but I understand the Matt Helm novels were your fairly typical James Bond-by-way-of-Mack Bolan potboilers. The stroke of Genius in the Dean Martin movies was that they completely subverted the format before they even hit the ground, turning the films in to a parody of the 60s spy genre. If you're going to do it straight, I don't really get what the point is.

Oh, by the way, I"ll be reviewing "The Silencers," The first Dean Martin Helm movie on Friday, August 7th.
Posted by dino martin peters at 7:32 AM

WOW I DON'T KNOW PALLIE....THERE'S JUST NO OTHER LIKE THE KING OF COOL. IT WOULD BE HARD TO FEATURE ANY OTHER MAN. ON A GOOD NOTE...ATLEAST IT KEEPS DINO ALIVE IN HIS LEGACY....

Hey pallie DMP. I had hoped if these movies were ever done again that they would be more like Dino's. I figured that Hollywood would want to make them more gritty, etc. like the books.

The Dean Martin Matt Helms were very campy and great fun.
TRhe Books by Donald Hamilton would be what movie makers would concentrate on.
Long over looked books are slowly turning up as the foundation of newer movies. The writers of the screenplays often dumb-down the material because they are not seasoned enough to create more mature and dramatic storylines. Hense excessive explosions,cursing and sex.
Love the Dean Martin Blog Vino

Hey pallie Terri, the only good thin' that I see from comin' out of all of this is that our Dino's name is gettin' lot of mentionin' 'round this possibility...btw, don't think that I ever asked you if you woulda be willin' to be interviewed for this here Dinoblog...to tells your Dinostory to the world...woulda you be interested?

Hey pallie, likes I knew that too...and perhaps it they are gonna does this it will be better if they are not at all likes the Dino-originals....that woulda be the biggest of the big mistakes for Dinosure....thanks for droppin' some Dinopatter....

Hey pallie, thanks for takin' the time to stop by for the first time and share your Dino-thoughts...hopes we will hear from you again....and thanks for sharin' such kind words 'bout this Dinomission....