Rat Pack coming to be theaters?

Hey pallies, likes here is more on the Dinopossiblity of Robert Randisi's Rat Pack novel comin' to the big screen. Loves readin' more 'bout this, especially how Mr. Randisi and Mr. Hackett first gots together...sounds like pure Dinomagic to me...so read on...if you woulda likes to read this in it's original form over at Crime Spree Cinema, likes just clicks on the tagg of this Dinogram. Dinothrilled, DMP 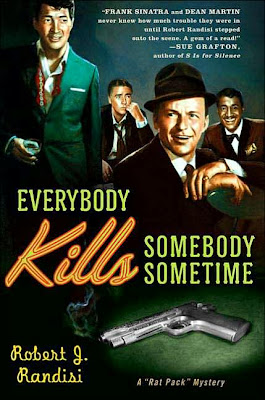 Rat Pack coming to be theaters?

Frankie, Dean, Sammy and co may be heading back to the silver screen.

Iconic Crime writer Robert Randisi has sold the films rights to Everybody Kills Somebody Sometime to Sandy Hackett, son of the late comedian Buddy Hackett.

The novel features the legendary Rat Pack (Frank Sinatra, Dean Martin, Sammy Davis Jr, Peter Lawford and Joey Bishop) and is set in Vegas in 1960. The story centers around threatening letters that being sent to Dean Martin. The pack assisted by pit boss Eddie Gianelli, work to figure out who is sending them.

The novel is the first in a series, with the fourth being slated for 2009.

Sandy has appeared in handful of films and television series over the years, and recently started to work behind the camera as a producer. My own memory of him is as the MC of a wet t-shirt contest in Hot Dog: the movie.

Hackett also stars as Joey Bishop in the Vegas show The Rat Pack is Back.

It was through that show that Bob and Sandy became acquainted.

Bob: “I needed an opening for the third book, which is usually set in the present before we flashback to 1960's Vegas. I decided to have 80 year old Eddie attend a Rat Pack tribute show. I checked on the web to see which show might be the best and I found The Rat Pack is Back, the Vegas show Sandy Hackett writes and produces, in which he plays Joey. I emailed Sandy, who was on the road with the show in South Carolina. He got back to me and said he'd love to appear in the book. We spoke on the phone. I sent him the first two to read and he loved them. He decided he'd like to option the first book. It took some time to put together, but Sandy is as crazy about the Rat Pack as I am.”

When asked about the novel, Sandy said “In an original recipe of mystery, murder and intrigue so well that you could just as easy believe you were reading a historical account of events transpired”

He was equally generous with his praise when talking about Bob, “he is a bright guy,
and has a great sense of humor. If he wasn't a writer I imagine he would have gone into the clergy.”

Father Bob… that puts a rather interesting image in my head.

Randisi is the author of over 500 novels, as well as being the founder of the Private Eye Writers of America.

He has been hired to write the screenplay, something that will be a first for him.

The goal is to begin filming in January of 2010, which would be exactly 50 years after the book (Which takes place in Jan of 1960).
Posted by dino martin peters at 7:42 AM

I am so excited about this. The more and more I hear about it, the more I'm psyched for it to finally be made and released. Just imagine how cool this flick is going to be.

Hey pallie Keith, had seen your Dinocomment at the original post of this Dinostory..and likes you I share your Dinoexcitment over this Dinopossibility...not thrilled that it is our Dino that gets threatened in the book...who would dare to go after our King of Cool...but so loves that our Dino is the center of attention in the mystery...where our Dino always oughta be....