Dean Martin: "His Legacy Is That He Never Complained And He Worked Very Hard At What He Did, And He Treated Human Beings With Respect." 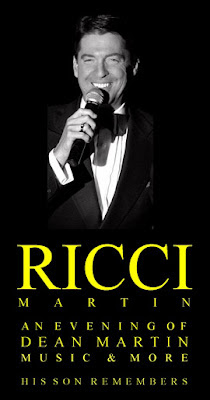 Hey pallies, a few ago this interview with our Dino's boypallie Ricci appeared in the Valley News Dispatch before his August 20 gig in Pittsburgh. Sorry I didn't get this blogged before, but Ricci shares some great Dinoinsights that I thought you pallies would enjoy readin' for your Dinoedification. If you prefer to read the Dinoliterature in it's original format, just click on the title of this Dinopost.


He was an "everyday person" who happened to be a superstar, says his son Ricci Martin.
That's why the music and the aura of Dean Martin live on years after his death, says the younger Martin. (Dean Martin died Christmas morning 1995, at age 78. He would have been 90 on June 7.)

Ricci Martin celebrates the ongoing fascination and attachment to the man and the entertainer in "Dino: His Son Remembers -- An Evening of Dean Martin's Music and More" in a free concert at 8:30 p.m. Sunday.

It will be a day of song, dance, games and other activities beginning with an outdoor Roman Catholic Mass at 10 a.m. "Everyone becomes Italian," even if it's only for a few hours," says Mitch Abraham, one of the entertainment committee members. "We're not sure if we are the largest Italian festival in the region, but we do try to be the best at what we do!"
Martin, on the phone from his home near Park City, Utah, says he plans to draw from the greatest-hits repertoire of his dad, including "Volare," "You're Nobody 'Til Somebody Loves You," "Memories Are Made of This" and his signature ballad, "Everybody Loves Somebody Sometime."

But it will be much more than just a songfest, he says. "It will be an evening celebrating dad's life," he says.

He will share humor and stories from his book, "That's Amore: A Son Remembers Dean Martin," and offer a video presentation of photos from "The Dean Martin Show," as well as rare family photos and clips from his dad's movies.

The entertainer, who once toured as an opening act for The Beach Boys, also will go into the audience for a question-and-answer session.

"I keep it like the way dad was in his life: having fun, being spontaneous and not taking things too seriously," Ricci Martin explains.

In many ways, the son says, he has fashioned his approach to life around his late father's. "I really respect the man for who he was and the way he treated people. He was a superstar who might have had every excuse to let it go to his head.

"He was a star in motion pictures, records, stage and television. Frank (Sinatra) and Sammy Davis Jr. (Dean's "Rat Pack" buddies) never even crossed over into a successful weekly variety television show. But dad had his feet on the ground all the time.

"The audience is still out there and still adores him and misses him," says Martin, who says he is surprised and pleased at the wide span of generations that embrace his dad's talent.

Martin says he receives fan mail about his dad from teens and preteens saying, "'There's something great about your father's music.'"

Those who are older have comforting memories of Dino, "that relaxed individual," says his son, coming into their homes via TV Thursday nights for most of a decade. Parents watched with their children, and both remain fans.

His father was not afraid to show his vulnerable side, he says, letting people see him make mistakes, including misreading cue cards. He was always amazed at his own success and never one to pat himself on the back, Martin says.

His is a timeless music, he adds. He says his dad fashioned himself after singers like Eddy Arnold and Bing Crosby. "But he put his own thing on it. That's what any good artist does: takes from the great and makes it his own," he says.

Ricci Martin thinks that if his father could see his show, he would be pleased to see the warmth still demonstrated toward him.

"He knew I loved and respected him. He might be amazed at how many people show up, and their feelings for him -- thousands and thousands of people."

Martin says it is a very humbling experience for him when his father's fans share their memories with him.

He feels a responsibility, but does not view it as a burden, to represent his father onstage, he says. It's about maintaining the class and integrity for which his dad was known, he says. "Most people who come to the show have at one time or another seen him in (Las) Vegas, or certainly in a movie or on TV. Thank God people say I'm somewhat like him. Some say I have similar mannerisms. That's very positive."

He does not try to copy his dad's vocal style.

"I just sing them the way I sing them. I would never ever step on dad's toes. There was only one Dean Martin. It would be absolute suicide to do that." Martin is backed by a four-piece band.

In the show, Martin talks about his dad's key relationships, including his break-up with Jerry Lewis; The Rat Pack (he knew Sinatra and Davis as "Uncle Frank" and "Uncle Sammy"); and the rumors of Dean's excessive drinking ("As Frank Sinatra said, 'I've spilled more than Dean drank,'" Ricci says).

His dad worked very hard at his craft, he says.

"He fooled so many people who thought he glided through show business. He made that look so easy, people bought into the idea that it was effortless. Since he was not a complainer, he never made people realize 'I am working my butt off here.'

"His legacy is that he never complained and he worked very hard at what he did, and he treated human beings with respect."

More information on Ricci Martin is available at www.riccimartin.com.
Posted by dino martin peters at 4:50 PM

Hey pallie DMP! Thanks for sharing this. I'm glad that we will be discussin' this as a meaty thread on the Dinogroup. It's always great to read stuff from his boypallie Ricci. We definitely see time and time again how often Ricci pays homage to his daddy-o. He really honors Dino quite much. That's wonderful that he has the proper respect for the King of Cool.

Hey pallie Keith, dude thanks again for your Dinopatter....I do love to hear Dino's boy and girl pallies sharin' Dinostories and payin' homage to their cool daddy-o! I, too am lookin' forward to some great Dinoconversations 'bout Ricci's Dinoinsights!