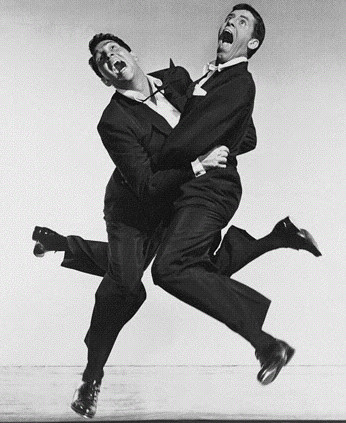 lewis.martin.jumping.jpg, originally uploaded by xxmarcelxx.
Crooner Dean Martin and comedian Jerry Lewis staged their first show as a team this day in 1946 at Club 500 in Atlantic City, NJ. Actually, the two had met while performing -- separately -- at the Glass Hat in New York City and decided to try an ad-lib act together. The rest is entertainment history.

The duo went from earning $350 a week to $5,000 a week in under eight months, with Martin playing the romantic straight man opposite Lewis as his goofy, unpredictable partner. Ten years later, the curtain came down on their final team performance at the Copacabana in New York. Over that decade, the zany two made seventeen movies including My Friend Irma, That’s My Boy, The Caddy, Pardners, Jumping Jacks and The Stooge.

Dean Martin went on to become a recording star (Memories are Made of This, Return to Me, Everybody Loves Somebody), movie star (The Young Lions, Rio Bravo, Sons of Katie Elder, the Matt Helm series) and host of his own TV variety show, The Dean Martin Show. Lewis pursued a solo career in Hollywood as comic lead (The Sad Sack, Cinderfella, The Nutty Professor); director (The Bellboy, The Errand Boy, The Patsy, Family Jewels, Which Way to the Front); producer; teacher (USC); and consummate entertainer. It would take 20 years for the two to speak publicly with each other again.

Martin died December 25, 1995. Lewis continues to set records in fund-raising during his annual Stars Across America! Labor Day Telethon for the Muscular Dystrophy Association (he has been chairman of the MDA since 1950). The Las Vegas resident continues to make nightclub appearances and returned to the stage in the Broadway revival production of Damn Yankees in 1996. Critics called his performance as the Devil, a rip-roaring success. This commentary courtesy of the web site Capitol Hill Blue.

Posted by dino martin peters at 6:59 AM

Hey pallie! This is a nice bit of info about Dino and the Jer's duo. They were quite a team together. I loved those movies of theirs. I've seen about half of them. They definitely had great chemistry with one another.

Hey pallie Keith, thanks for your faithfulness to sharin' comments on each and every Dinoblog Dinopost. Yeah, I liked this little Dino and the jer history that details their teamin' up and their partin' ways.

Interesting read and great photo. They really were one of the great teams in history...

Hey pallie Jeremy, man so glad you like it.....I thought it was a nice little write up 'bout the greatest comedy duo ever!