Hey pallies, so sorry all my pallies, but I had the incorrect date for our Dino's boypallie Dino Jr.'s passing, so I missed postin' this on the day of his death. Here is the grave site for our Dino's beloved son. Dino Jr. was born on November 17, 1951 and he died on March 21, 1987. If you wanna see this in it's original format, just clicks on the tagg of this Dinogram. Dinorespectfully, DMP 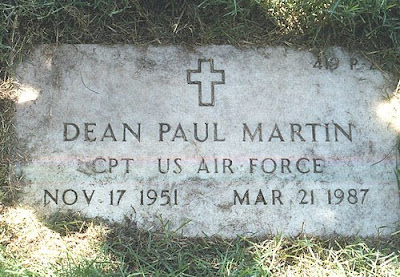 Dino, the son of Dean Martin, part of the 60's pop band "Dino, Desi, and Billy." An Air Force Captain, he was killed when his plane crashed into a mountain; buried at the huge military National Cemetery in Los Angeles, California. His grace is against the south fence bordering Wilshire Blvd, in Section 419, grave P-28.
Posted by dino martin peters at 7:29 AM

Hey pallie DMP. Thanks for sharing that. I had never seen it before.

Hey pallie Keith, just part of true Dinopalliedom pallie...just a bit sad that our Dino and his boypallie Dino Jr. weren't buried side by side...but each have their special place to rest....