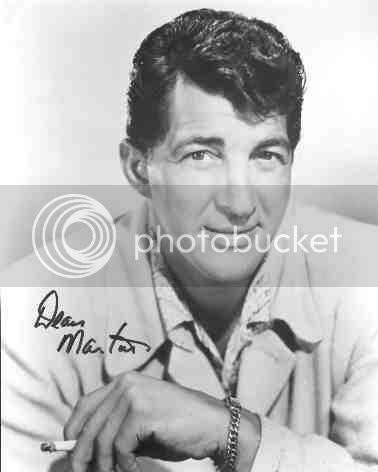 " border="0" alt="" />
Hey pallies, here's a great Dinotrib from the Toronto Star newspaper. This dude Patrick McKenna is a true Dinoholic for Dinosure. If you wanna read the post in it's original form, just click on the title of the Dinoblog Dinopost!

Take it from us, pally: Dean was `king of cool'

I've always thought of Dean Martin as everyone's mischievous drunken uncle. You know, the one who makes parties so much fun.

Sure, Uncle Dean is going to say something off-colour, drink and flirt too much, but at some point in the evening he's going to sing and all will be forgiven.

Wouldn't it be great to be as carefree, confident and successful as Uncle Dean seemed to be?

Whether he was singing and dancing and setting up his frenetic partner, Jerry Lewis, or reinventing himself as a solo act in front of a Vegas audience, then moving on to be a leading man in films as a cowboy or secret agent, Dean always took the laid-back, smooth approach. His albums and television show embraced such an ease that he made Perry Como look energetic.

But let's not forget the mischief. Dean's charming mischief, delivered through twinkling eyes and a smiling face, made his humour and music impossible to resist.

Nobody can sing "Baby, It's Cold Outside" the way Dean coerces his prey into staying the night, or get away with calling women "pigs," as he did in the film Some Came Running.

And still they find him sexy. If I don't compliment my wife's choice of shoes twice a day, I'm tagged "an inconsiderate slob!" Oh, to be blessed with charming mischief.

But men found Dean charming as well. Not just because he drank, smoked and got to hang out with Marilyn Monroe – all of which are fine reasons, too – but for something as simple as always calling guys "pally."

Sure, it was because he didn't know or remember your name ... but "pally" is inclusive, an endearment. Whereas "pal" can be threatening as in "Look, pal ..." or "Listen here, pal ..." By simply adding the "ly," Dean made everyone feel like one of the guys.

Now, I don't want you to think Dean was all style over substance. Only real talent could knock The Beatles out of their 1964 streak of No. 1 hits the way Dean did with his release of "Everybody Loves Somebody."

Which, incidentally, Frank Sinatra had previously released back in 1948 – and which only reached No. 25 on the charts.

The "cool quotient" argument between Martin and Sinatra fans is a silly one. Especially if you think it was Sinatra ...

But, honestly, both men were incredibly talented and incredibly cool in so many ways. To me, though, Dean's panache came from a natural place – he didn't have to scream or demand it the way Frank seemed to.

Dean's cool came from not caring what other people thought. He was as comfortable in a Sy Devore tuxedo as he was in golf attire. As comfortable being a crooner or a comedian as he was a playboy or cowboy. The man had confidence and the talent to back it up.

Even Elvis noted, "I may be the king of rock 'n' roll, but Dean Martin is the king of cool."

So there! You can argue with me all you want, but are you really going to argue with Elvis Presley about cool?

What a great article. Most of us growing up had an uncle or so forth that we looked up to. He was a dude that we wanted to emulate. There is nobody better to emulate that Dean Martin, the King of Cool. What a man. He represents so much of what I aspire to be like. That's my kind of role model.

hey pallie Keith, couldn't say it better myself dude...Dino is truly where it is at...and I loves this Dinodevotee who tells it so Dinotruly! Thanks for stoppin' by the ol' Dinoblog!