But “Dino” suffered a kick to the head


Hey pallies, likes today's Dino-gram from the annals of the all-thin's-entertainment feast of a blog, "The Moveable Fest" is one of those great Dino-finds that we missed first time 'round when posted in 2012 and recently resurfaced while doin' our almost daily 20 or so pages of google Dino-blog searchin'.

Scribed by Mr. Stephen Saito, it is a remarkable reflection on, as Saito has tagged it, "NINE GREAT UNREALIZED FILMS FROM SCOTT, NOLAN, SCORSESE AND OTHER NOTABLE CONTEMPORARY FILMMAKERS."  And, likes indeed the ultimate "unrealized" Dino-bio based on superb scriber Mr. Nick Tosches' magnificant missive of absolutely awesome adulation of our most beloved Dino, "DINO: Living High In The Dirty Business Of Living," is one of the nine unfilmed flicks reflected 'pon.

Saito's powerful paragraph on the shelved Dino, only makes us yearn ever more to somehow, someway see Tosches' incredibly insightful Dino-tome yet makes it to the big screen.  As the Dino-light continues to grow and glow ever Dino-brighter day by day, there couldn't possibly be a better time to have this Dino-tale reach the big screen.  Indeed, with the 100th anniversary of our Dino's entry onto the planet just a couple of years away...now would be the most excellent time to see "DINO" gets casted and shot.

We thanks Mr. Stephen Saito for includin' our Dino in his illustrious list of unrealized films and says sorry that we didn't get it printed here at ilovedinomartin earlier.  To read his entire prose, simply clicks on the tag of this here Dino-gram.  Dino-delightedly, DMP 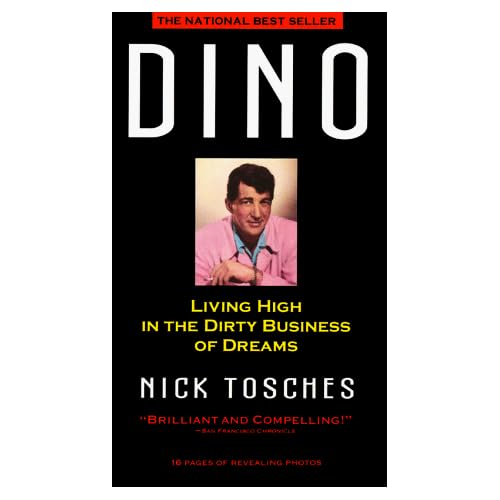 Amidst the 1990s swing of nostalgia for the retro cool of the 1950s, Warner Bros. commissioned a script from “Casino” screenwriter Nicholas Pileggi about the life of Dean Martin, which would reunite Pileggi with director Martin Scorsese. A planned cast of Tom Hanks as Martin, John Travolta as Frank Sinatra, Hugh Grant as Peter Lawford, Adam Sandler as Joey Bishop, and Jim Carrey as Jerry Lewis was lined up for Scorsese's first biopic since 1981's “Raging Bull” But “Dino” suffered a kick to the head when Warner Bros. allowed Scorsese a window to direct “Gangs of New York” for Miramax. Its long and expensive shoot led to the Rat Pack pic being shown the door. Scorsese would fulfill his commitment to Warner Bros. in 2003 by making “The Aviator,” but “Dino” remains on the shelf. He has since suggested he might make a Sinatra biopic instead.
Posted by dino martin peters at 7:17 AM

What a shame that this film did not get made. With the cast that was mentioned it would have been an amazing film for sure. Who knows, maybe something will get done in the future. I know sometimes the movie making wheels move very slow in Hollywood.Thank you for bringing this very interesting blog our way!

Hey pallies, likes quire Scotty dude...have you had the privilege of indulgin' in "DINO: Living High In The Dirty Business Of Dreams?" Keeps lovin', keeps sharin' our most beloved Dino!

I have not had the pleasure of reading this book but i mite check out my library and see if i can get it there. It looks to be a great read!

Hey pallie, likes Scotty-o, likes you simply must checks it out...required readin' for all Dino-holics...amazin' insights into the life, the times, and the teachin's of our Dino! Keeps lovin', keeps sharin' our Dino!