Hey pallies, likes welcome back to day tres of our mighty marathon of Matt Helm reviews from the pen of ""Eegah!! and Tabonga!" who, as we have shared before, hangs his hat at the beautifully  bodacious blog, "The Dwrayger Dungeon - Where it's 13 O'Clock on the 13th Floor!  - A Cyclopedia of the Wild 'n' Weird Side of Movies & TV."  Likes bein' day three of this fabulous four part series, the accent has to be on. as Eegah!! and Tabonga! swankly scribes it, the "third leg of the Matt Helm superfecta"..."The Ambushers."

Likes once 'gain this delightful dudes openin' Dino-statement sez it muchly, ""The Ambushers" is silly, stupid, and ridiculous, and I enjoyed every stinking minute of it!"  As mucho of youse Dino-holics knows this is also our least fav of the Helmer quartet, but still filled-to-the-brim with Dino-pleasures unendin'!!!!!

And, once 'gain our pallie of pallies, Eegah!! and Tabonga! has made a sweet statement of appreciato for our humble little ilovedinomartin blog sayin'..."Down in The Dungeon we just dabble with Dino info, but if you really want to know more about the man, then head on over to the I Love Dino Martin site,  you will not be disappointed!"  Such kindness means the moon to us, as we are tremedously touched by these wonderful words!


This time 'round Eegah!! and Tabonga! has outdone himself in both the prose and pixs departments.
E&T has a wonderful way with words that are unequivocally evocative while the screen caps are, as ever, powerfully, potently provocative!!!!!  This is the first Helmer review that ever remember that has included the closin' sceen from "The Ambushers" where our most beloved Dino meets and greets a new rookie recruit and as E&T delightfully describes it..."The closing scene features Dino and one last girl, and one last joke!"  It's our Dino at his coolest, hippest, randiest ever...and to our way of thinkin' this one scene is worth the price of admission for the entire epic!!!!!

For a third time, we expresses our sadness for bein' so so tardy in gettin' Eegah!! and Tabonga! ravin' reflections on Dino as Helm posted here at ilovedinomartin, and we 'gain thank him profusely for all his excitin' efforts in the cause of our most most beloved Dino!  Stay tuned tomorrow for the last of this stunnin' series of Helmer reviews, that of course bein' on "The Wrecking Crew." To checks this out in it's original source, simply clicks on the tag of this here Dino-report. 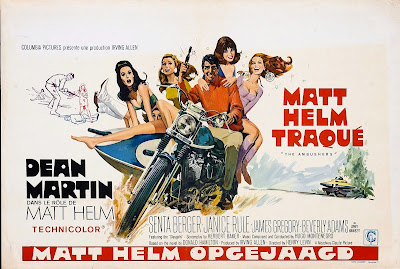 "The Ambushers" released in 1967 is the third leg of the Matt Helm superfecta after "The Silencers," and "Murderer's Row!" The Fourth in the series is "The Wrecking Crew!"  "The Ambushers" is silly, stupid, and ridiculous, and I enjoyed every stinking minute of it! 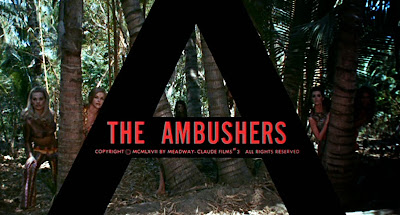 Down in The Dungeon we just dabble with Dino info, but if you really want to know more about the man, then head on over to the I Love Dino Martin site,  you will not be disappointed!

The Guv'ment had a different kind of space program going on before anybody ever set foot on the moon! A perfect flying saucer, but not from space, but from right in the good ole U.S. of A! 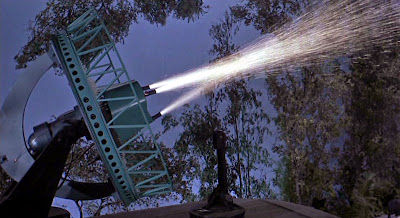 But, as always, they're not the only ones who want to play, and the saucer is brought down on it's maiden flight by some powerful anti-gravity magnet ray emanating out of Mexico!

Inside the saucer in the pilot's seat is Janice Rule as Sheila Sommers! Janice was in the "Twilight Zone" episode titled "Nightmare As A Child" as Helen Foley, and also in one of the strangest films I ever saw, "The Swimmer" starring Burt Lancaster! On the right is the man who wants to rule the world, and thinks hijacking this here saucer is a good starting place, Albert Salmi as the nefarious Jose Ortega aka Leopold Caselius! Albert has the rare distinction of being in not just one, but three "Twilight Zone" episodes, "Execution," "A Quality Of Mercy," and "Of Late I Think Of Cliffordville!"

We're trying to keep it down to 20 stills per movie, but I just couldn't do it on this one, so I decided to double up more than usual! I think you'll be able to understand and recognize the reasons why! 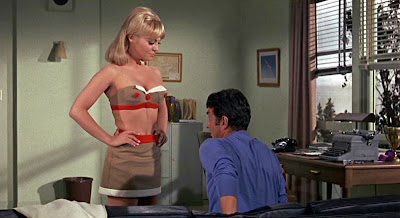 One of the newest contraptions they've developed at the Intelligence Counter Espionage Rehab Center is a bra, that when the strap is loosened, it shoots a bullet! Luckily for Matt Helm, it was only loaded with blanks this time! 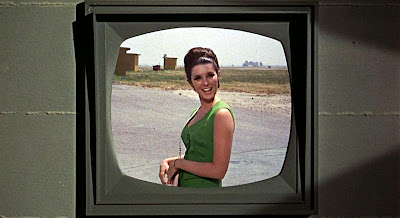 Cutie Pie Beverly Adams shines in the role of Matt Helm's secretary Lovey Kravezit in the first three flicks, but she wasn't in the forth one for some reason! Beverly was also in "How To Stuff A Wild Bikini," "Devil's Angels," and "The Torture Garden!"

This is a demonstration of how the hand-held version of the anti-gravity magnet ray works!

Matt Helm's boss James Gregory as MacDonald fills him in on what's going down south of the border! I love the fact they're watching a 16mm film of a boxing match in his office, and Matt's eating popcorn just like he's at the movies! James Gregory was also in two "Twilight Zone" episodes himself, "Where Is Everybody," and "The Passerby!" This was the third time James played MacDonald, but he too was left out of the fourth film!

The sponsor for the fight is the Montezuma Brewing Company, and the owner is up to his ears in corruption and greed, and it's up to Matt to get to the bottom of it all! Here's what the jingle sounds like with an extra minute of some of the cool background sounds created by Space Age Pop star, and early moog stylist Hugo Montenegro! 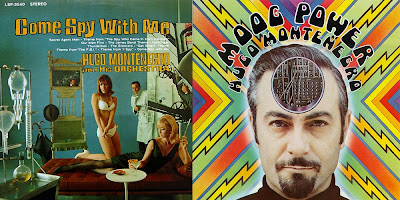 Here's a look at a couple of Hugo's album covers! 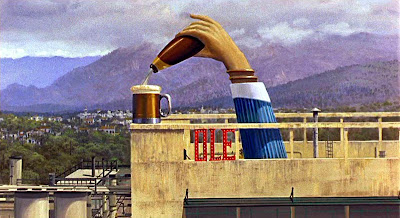 The familiar face of  Kurt (Land Of The Giants) Kasznar is Quintana, the owner of the Montezuma Brewery! When Matt Helm goes out on assignment, his undercover job is that he's a freelance fashion photographer, and he's here to do a photo shoot with a revived Sheila Sommers as his wife, since she's the only one who can identify Jose Ortega! You wouldn't know it by looking at him, but Kurt Kasznar was nominated for a Tony Award for his contribution to the Broadway version of "Sound Of Music" in 1960! 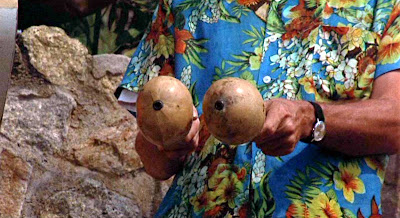 I thought this was original, a member of this band has guns built into his maracas that are used in a feeble assassination attempt on Matt Helm!

Way ahead of it's time, information is sourced back to MacDonald via some future electronic system! 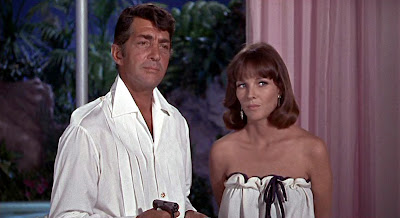 I read that Janice Rule said that this was THE worst movie she was ever in, and that she deeply regretted it! Too bad, because the fact that she looks so out of place is one of the things that makes this movie!

When pipes get shot during a gunfight in the brewery, Matt Helm takes a second to savor the situation, and decides to wet his whistle with some free suds! Not much later, he finds himself in a vat of beer with a Quintana who can't swim! 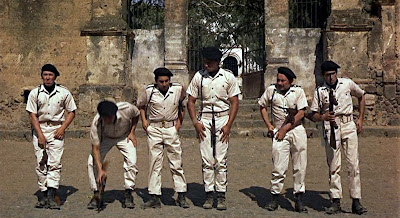 "The Ambushers" was never meant to be taken serious, and this scene involving a firing squad fumbling around looking for a match for their intended victim Matt Helm's last cigarette request could have just as easily been in a "Three Stooges" episode!! 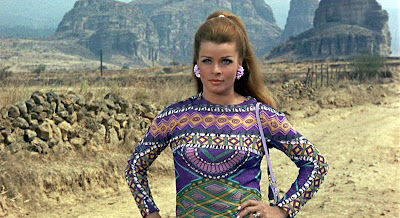 The sensational Senta Berger is bad girl Francesca Madeiros!! Senta is still cooking today, and her career dates all the way back to 1950's German Krimi-Thrillers like "The Terror Of Doctor Mabuse!" Awesome!!

Some of the outfits these gals are wearing in this movie will flip your lid! Here's a prime example as Jose Ortega proceeds to remove some of Sheila Sommers' clothing by using his special anti-gravity magnetic ray gun that now apparently manages to work on anything, metal or not! 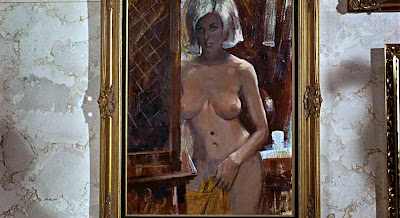 It's mainstream 1967, so there's no nudity in "The Ambushers" at all, nothing really close actually, but they didn't have a problem lining the walls of Jose Ortega's pad with paintings, not photos, of nude women, which I guess made it artistically okay! Still kind of crazy, if you ask me! 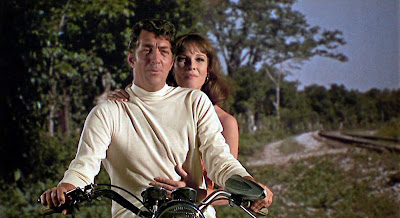 Dino rides off into the sunset with his girl of the moment Sheila Sommers, but even though they went through a lot together, Matt Helm's a free spirit and will be moving onto higher ground! You can just see it on his face!! 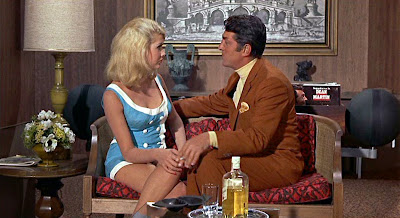 The closing scene features Dino and one last girl, and one last joke! The're listening to some of Dino's music, but she just can't get into the mood until a song by Frank Sinatra comes on! I bought the 4 disc set called "Matt Helm Lounge" on Amazon years ago, and it seems a bit pricey now, but I saw they stream "The Ambushers" for $2.99, and that's probably your best bet these days!