Dean Martin as Matt Helm leads in the Swagger Department

Hey pallies, likes we're back for more Dino-as-Matt Helm awesome action from our Dino-diggin' pallie " "Eegah!! and Tabonga!," who happens to hangs his hat at the beautifully  bodacious blog, "The Dwrayger Dungeon - Where it's 13 O'Clock on the 13th Floor!  - A Cyclopedia of the Wild 'n' Weird Side of Movies & TV."   Today we share his take on our Dino as Helmer numero duo, "Murder's Row" and usin' his coolest of cool creativity, Eegah!! and Tabonga! puts a real twist on his pix and prose by comparin' Helm to Bond in his reflection tagged, "FROM RUSSIA WITH LOVE vs. MURDERERS' ROW."

Likes in all the times that we have shared reviews of our Dino as Helm, we never ever remember any other scriber doin' such a cool comparison of Dino and whoever was playin' Bond at the time.  We simply can't do justice to Eegah!! and Tabonga's intensely intriguin' way of puttin' Helm and Bond side by side, but suffice it to say that our most beloved Dino comes out on top!  So, sits back and enjoys these rad remarks by the one and only Eegah!! and Tabonga which enjoys spectacular screen caps and potent prose.

Once 'gain, we sez thank you very much to Eegah!! and Tabonga for more elegant efforts in the 'cause of Dino as Helm, and we 'gain expresses our regrets that we didn't get this posted much much sooner then today.  To checks this out in it's original source, simply clicks on the tag of this here Dino-gram.


FROM RUSSIA WITH LOVE vs. MURDERERS' ROW

For this Super Saturday Spy Special I'm going to compare two movies that were both the second release in a series, "From Russia With Love" made in 1963, and "Murderer's Row" made in 1966! There will be 10 different reference points, and whoever gets the most points is the winner! It's gonna be that simple! I'm sure to catch some flack no matter which way it goes, so let's just get ready to rumble!! 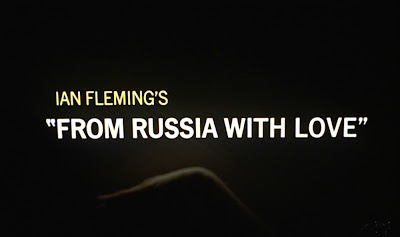 "From Russia With Love" is soft and sensual, and not quite what you'd expect! 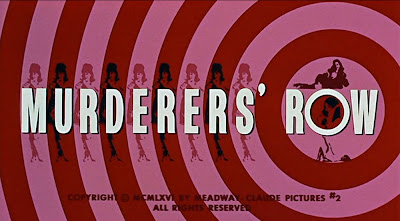 "Murderers' Row" is great Pop Art, but it is kind of brash and cartoony! First point goes to "From Russia With Love!" 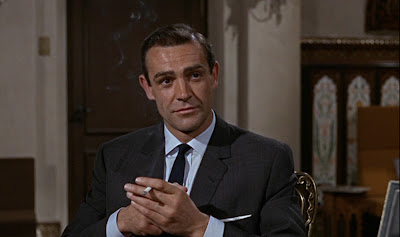 Unfortunately, nobody is better than Sean Connery as the character James Bond, he's smooth, he's suave, and he's got a license to kill! 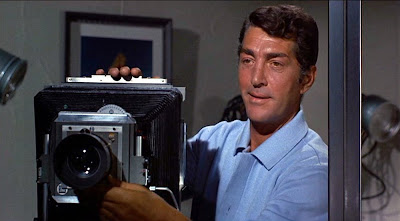 Dean Martin as Matt Helm leads in the Swagger Department, but since "Murderers' Row" is obviously a comedy, Matt Helm is never given a chance to be taken seriously! James Bond wins this point! 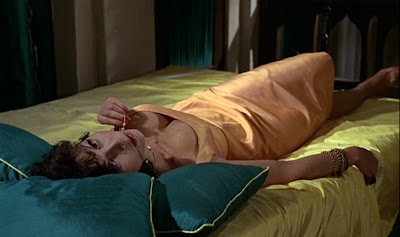 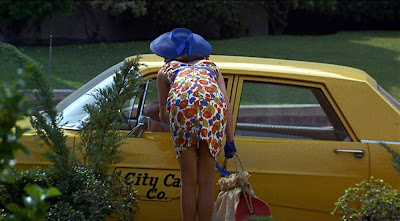 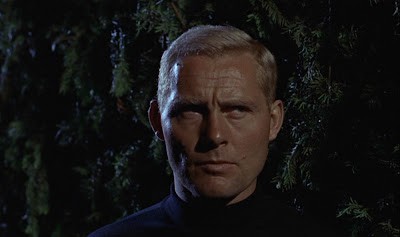 Robert (A TOWN CALLED HELL) Shaw as Agent for SPECTRE Red Grant is one mean and ruthless character no doubt, but as tough as he is, he still seems vulnerable! 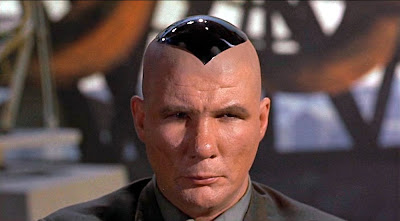 Tom Reese is a guy named freakin' Ironhead! Tom's had a long and outstanding career. He was in the "Twilight Zone" episode titled "The Intruder," and was the Sheriff in "Vanishing Point." At the end of the film, Ironhead gets picked up by a huge magnet! That's got to be a stainless steel plate in his head, otherwise it would get all rusty and infected, and any good metallurgist will tell you that stainless isn't magnetic, so that concept didn't work! Still, Ironhead is a bigger weirdo than Red Grant, another point for "Murderers' Row!" 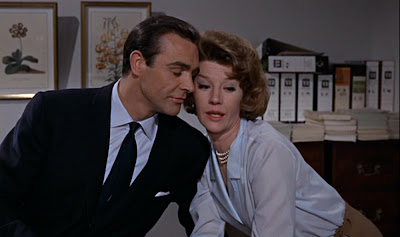 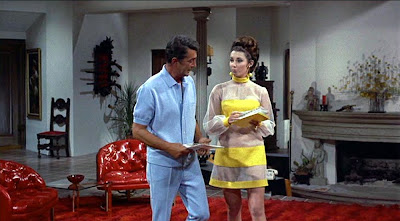 Beverly (HOW TO STUFF A WILD BIKINI, TORTURE GARDEN) Adams played Lovey Kravezit in the first three Matt Helm Flicks! I've always had a thing for Miss Moneypenny, so this point goes to James Bond, although I do like Lovey's see through outfit with the strategically placed stripes!! 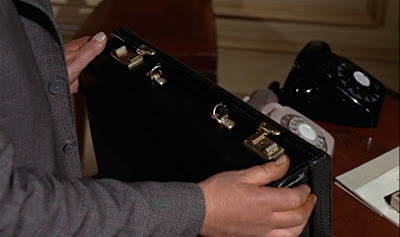 Bond's got a briefcase that contains a folding rifle, ammunition, gold coins, and a throwing knife, and if you open it the wrong way, tear gas shoots in your face! 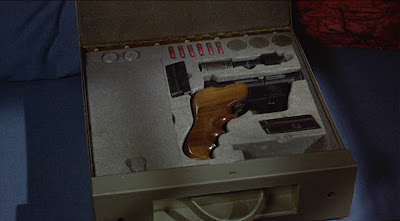 Matt Helm's issued a gun that after you pull the trigger, it takes 9 seconds to actually shoot, so when it gets into the hands of some bad guy, he usually ends up shooting himself, after fumbling around with it when it doesn't go off the first time! The gun wins this round!

07 Main Squeeze In A Nightie: 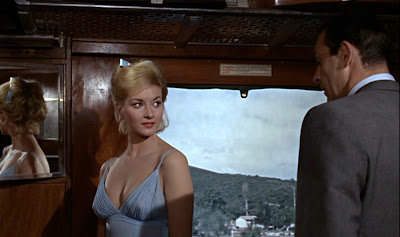 Miss Rome 1960, the classy Daniela Bianchi is Tatiana Romanova, the Russian Pawn! They had to dub Daniela's voice because her ultra strong Italian accent made her English almost indecipherable! 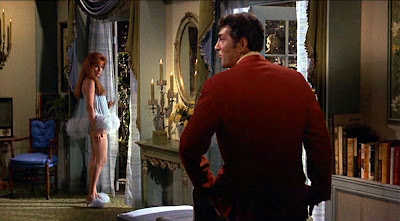 The always alluring Ann-Margret is the dancing machine Suzie! Her babydoll nightie and fuzzy slippers get the nod on this one!! 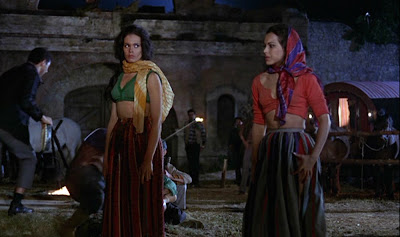 Magnificent Martine (QUEEN OF EVIL, SISTER HYDE) Beswick as Zora on the left, and the amazing Aliza (AGENT FOR H.A.R.M., BEAST OF MOROCCO) Gur as Vida get ready for a good olde fashioned gypsy catfight!! It just so happens I have a cat named Zora!! 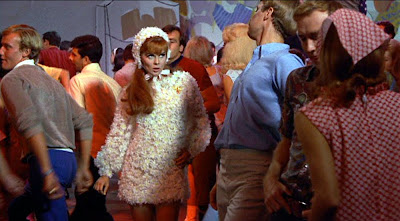 Ann-Margret's outfit in this scene is almost unbelievable, and screams out WTF!?? Pop Culture or not, Ann's outfit is just too much! I give this point to Martine and Aliza!! 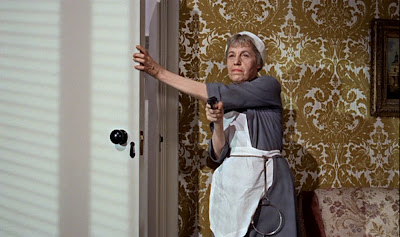 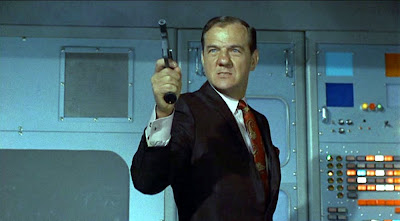 ....or Karl (13 RUE MADELEINE, PHANTOM OF THE RUE MORGUE, THE CAT O' NINE TAILS) Malden as the man who would rule the world, Julian Wall! My vote goes to Karl Malden! At least he didn't have to pretend to be a maid! 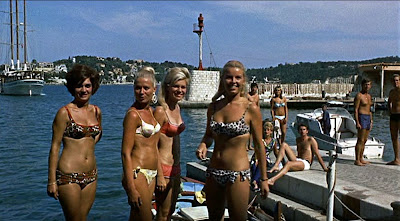 Oh, What the Hell, both of these stills are from "Murderer's Row!" So I guess that settles it, it was a close fight, but in the end, it was "Murderers' Row" by TKO in the last round!! 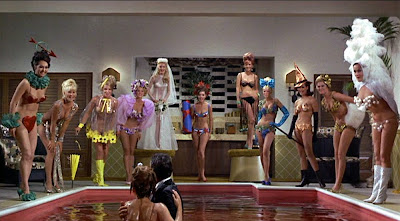 Just for the record, the music in both movies is great, and here's just a taste to whet your appetite!

"From Russian With Love" -  Matt Munro

Great comparison, pallie! Was a lotta "back & forth" but in the end...ob vi ous ly Dino will ALWAYS take the crown. Fun post!