and the role....was clearly written for Martin.

Hey pallies, likes hopes all youse Dino-holics are enjoyin' the delightful Dino-high that is bein' produced by all our Dino as Matt Helm postin's of late.  Well, likes we gots yet ' a third review of Helmer numero uno to shares with all youse Dino-philes this day.  It's scribed by a dude tagged Mr. Morgan R. Lewis who hangs out at his self-tagged pad, "Morgan On Media."  Mr. Lewis tells us 'bout himself, that he is  "a software engineer/web developer with far too much time on my hands," who hails from the "Springfield/Eugene area of Oregon."

While we ain't gonna say that Lewis' take on our Dino in "The Silencers" is the bestest of best that we ever read, it has some good insights into our main man, and, of course, we also enjoy seein' screen caps of our Dino as Helm.  To us, the best insight that Morgan has is one that we have often heard said in other Helmer reviews recently published here:  "Matt Helm is played by Dean Martin, and the role (at least in the movie; it’s based on a novel) was clearly written for Martin."  And, likes the trustworthy truth for all Dino-devotees likes us is that we lavishly loves seein' our most beloved Dino playin' is ever cool, hip, and randy self!"

It's great  to find yet 'nother pallie reflectin' on the pleasures of our Dino as swingin' spyster Matt Helm.  As you read you'll find that Mr. Morgan Lewis has some interestin' things to contribute to swank scribin's on "The Silencers"...so reads on pallies!  And, likes stay tuned for more planned Dino-activity a la Helm in the comin' week!   We sez thanks to Mr. Morgan R. Lewis for his time, talent, and energy in lettin' his readership in on Dino as Matt Helm.  To checks this out in it's original source, likes simply clicks on the tag of this her Dino-gram.

When I reviewed Austin Powers, I mentioned that it appeared to be spoofing the James Bond spoofs, such as the Matt Helm films, of which I had seen bits and pieces here and there. I decided to remedy my partial viewing of the first Matt Helm film, The Silencers, to see how well it actually held up in full this many decades after its release (it was made in 1966, making it contemporary with the early Bond films).

Matt Helm is played by Dean Martin, and the role (at least in the movie; it’s based on a novel) was clearly written for Martin. Helm is an ex-secret agent for the American agency I.C.E. (Intelligence and Counter Espionage; this was a long time before the U.S. actually had an organization with those initials); he’s roped back in by his boss MacDonald (James Gregory) when an I.C.E. agent is killed investing a terrorist plot and Helm is the nearest person to the area where it occurred. Helm would rather continue playing photographer playboy (or Playboy photographer); he’s one of those characters that is both a womanizer and inexplicably attractive to women. Seriously, there’s only one woman in the film who doesn’t wind up at least trying to get in bed with him, and she’s shot three minutes after her introduction. 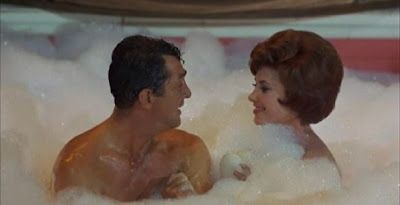 On the other hand, it’s not like most of the male characters fare all that well either. There’s not much character development for anybody who isn’t Matt Helm, and there isn’t much for Matt Helm either. Everybody is very much a broad-strokes caricature. Helm’s boss MacDonald is just a standard “spy boss” character, flat and uninteresting. His partner Tina (Daliah Lavi) is a classic femme fatale, dangerous and sexy, and unconvincingly acted. Stella Stevens gives one of the better performances as the clumsy naif Gail Hendricks, who gets mixed up in the whole affair after being inadvertently passed some confidential information, but the whole relationship between her and Helm is obvious and predictable from the beginning. And the main villain, Tung-Tze, is played by Victor Buono; Buono is pretty good as a hammy villain, but he doesn’t get much to do here. Also it feels rather trite to have a stereotypical “Yellow Peril” style Chinese villain be behind everything. It doesn’t help that Victor Buono is not Chinese or even Asian, which if you’re unfamiliar with the actor, you could still probably guess by his name being Victor Buono. 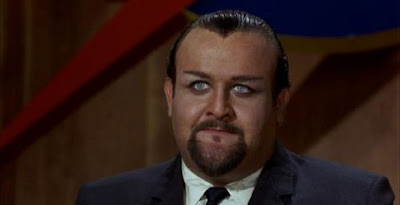 I said this seemed likely for an inspiration for Austin Powers, and watching the film, it’s pretty easy to trace the lineage of Bond spoofs. Matt Helm has a bit more comedy in it than one expects from a spy movie — though it has more than its share of witty (terrible) one-liners, it plays more like a standard 1960s sex farce in a lot of ways. There are musical numbers, mostly sung by Dean Martin (of course), and dance numbers with women in outfits that are meant to be alluring but sometimes just wind up absurd (none more so than Cyd Charisse’s bodysuit of a thousand tassels.) Matt Helm also has some funky spy gadgets, as you might expect… though strangely he has more in his home than in his spy business, including a rotating, sliding circular bed that dumps him in the bubble bath in the morning. For the spying, though, he has a camera that shoots knives, a gun that fires backwards (used to mild comedic effect by the clumsy Gail), and coat buttons that act as grenades. Oddly, though his car is supposed to be bulletproof, it doesn’t seem to fit with the typical spy cars. Though it’s outfitted with a minibar and all sorts of accoutrements, it just doesn’t seem to have style… perhaps because it’s a station wagon. 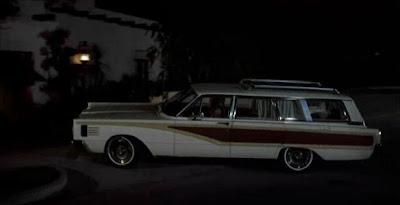 An Aston-Martin, it ain’t.

Director Phil Karlson had directed over two dozen films before The Silencers, so it’s surprising that a lot of the problems with the film can be laid at his feet. There are action sequences where things are obviously sped up, driving and dialogue sequences that take excessively long to get to the point, and there are a lot of stiff acting performances from the actors. Dean Martin is probably the best, but he’s far from great. There’s also a problem with the sound effects; the choices are often irritating, and frequently make no sense whatsoever. When Helm throws his coat-button grenades, there’s a high pitched whistle, like an incoming missile. Grenades don’t make that sound (or any significant sound) when moving through the air, and there’s no reason for the buttons to do so. And it’s not just a choice added by the sound editor; there’s actually a gag based on the noise the things make, so this is the director’s decision. But the biggest problem with the film is simply one of pacing; there are too many scenes that serve no purpose in the film and aren’t of interest on their own.

Thank you DMP for this review of the 'Silencers'. I always enjoy reading other peoples reviews and opinions, good or bad. I think the problem with some people's reviews is they tend to over analyze things instead of simply sitting back and enjoying the movie. This film was pure fun, enjoyment and entertainment but that point seems to get lost on some people. lol. But of course this was the very reason why the 'Silencers' and so many of Dean Martin's films were big hits. Quite a few of us got it though. lol

Have a great week DMP.

Hey pallie, likes Scotty-o...once 'gain dude, likes you are speakin' our Dino-language pallie...we're 100% with youse when you sez, "I think the problem with some people's reviews is they tend to over analyze things instead of simply sitting back and enjoying the movie. This film was pure fun, enjoyment and entertainment but that point seems to get lost on some people. lol." Likes, how cool woulda it be if everyone was in Dino-agreement with your perfect perspective on the Helmer quartet?!?!?!?!?!?!?! Keeps lovin' 'n sharin' our great great man! And, likes youse have the bestest of best Dino-weeks as well Scott our man!