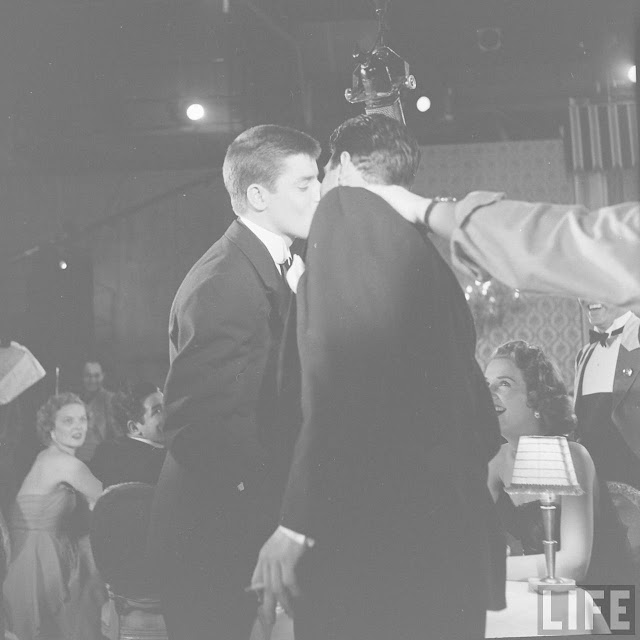 Hey pallies, likes today is the 91st birthday of our most beloved Dino's most beloved partner in comedy, Mr. Jerry Lewis.  Mr. Lewis entered the world on March 16, 1926 in Newark, New Jersey with the name Joseph Levitch.  We sincerely wish Mr. Lewis the happiest of happy birthdays .

Likes as many of you pallies knows,  for decades we had not been much of a fan of Mr. Lewis . But, likes after readin' the Mr. Lewis's touchin' and tender  tome on his relationship with our Dino: "Dean and Me: A Love Story," we' ve become aware of two thin's. One, the truth is that Mr.  Jerry Lewis always has, and always will love our beloved Dino. Two, the truth is no one ever has gotten closer to knowin' our Dino then Mr. Lewis durin' their ten year partnership of comedic joy.

Our Dino once in a live interview spoke of himself as a fatalist, and thus we believe he knew without a doubt that it was meant to be that he would meet up with and partner with Mr. Lewis in the early years of his career.  And, we believe that our Dino also knew without a doubt that he was meant to part ways with Mr. Lewis after a decade of stunnin' success.

Likes, it is obvious that Mr. Jerry Lewis absolutely adored our great great man.  Not that long 'go with Lewis was quired 'bout what he loved 'bout his partner, our Dino, Lewis replied "EVERYTHING!"  Well, we boldly believed that our Dino also truly loved Mr. Lewis, and today, on this 91st anniversary of Lewis' birthday we once 'gain are most perfectly proud to share a youtube vid of the Birthday Song that our Dino wrote and professionally recorded 'bout his remarkable relationship with Mr. Lewis on the occasion of Lewis' birthday in 1953.

As you listen to the song tagged "You Skinny Hebrew,"  you can really hear and feel our Dino's long lastin' love for his partner.....endin' the song with the absolutely awesome acclamation, "I love you Skinny Hebrew."  If you woulda likes to know more 'bout the recordin' of this song, click  HERE to read a post shared here at ilovedinomartin on February 5, 2010.

So, likes on this day of the anniversary of the birth of Mr. Jerry Lewis, ilovedinomartin wishes Mr. Lewis a happiest of happy birthdays and thanks him for lovin' on Dino likes all our Dino's other devoted fans does. And, likes on this day, ilovedinomartin shares with you this great pix of our Dino and the kid embracin' durin' a performance...and a clip of that greatest of great birthday presents that our Dino gave Jerry in 1953...the professionally recorded song that our Dino wrote for his partner, "You Skinny Hebrew"....our Dino's most personal of personal way of sharin' his awesome affection for Mr. Lewis.


Posted by dino martin peters at 7:38 AM

Amen Brother DMP!
Jerry was the closest ever to our Dino, and we need to embrace Jerry (and all his madness) as the truest of true Dino-zens purveyors..

Love this clip of that greatest of great birthday presents that our Dino gave Jerry in 1953! New to me!

Ed my pal...I couldn't have saids it any better myself! We definitely owe much respect to "the Jer". He seen a lot & he knows a lot...'bout our greatest pal, Dean. Happy Birthday Mr Lewis!

Hey pallie, likes Eddie-o....and likes of course all us Dino-holics are entirely envious of Mr. Lewis 'cause of his closer then close relationship with our Dino. Keeps lovin' 'n sharin' our most beloved Dino!

Hey pallie, likes Miss AOW, it is one of the greatest Dino-discoveries ever! We shared it a number of years ago and then it disappeared, and boy are we thankful that we took the chance to see if it might be back up on youtube. Keeps lovin' our most beloved Dino!

Hey pallie, likes Danny-o, we are still hopeful that Mr. Lewis will share more intimate details of his remarkable relationship to our Dino. Keeps lovin' 'n sharin' our most most beloved Dino!