Hey pallies, likes happy 20th day of Dino-winter-season. Recently I was searchin' for some Dino-seasonal-poses of him and the jer for 'nother Dino-post that I wanted to do, and this was the only Dino-illustration that I came 'cross. (BTW pallies, any of you knows of any 'net sources for such Dino and the jer holiday images?)

This Dino-product intrigued me 'cause I had been wonderin' if our great man and the kid had ever doin' any small screen winter-time capers. Well, if you read the review of this vid by Miss Annie Van Auken, you will discover that this is not a true Dino and the kid wintertime special, but some mis-mash of clips from the Colgates put together with not much in the Dino-seasonal department.

So, even though I have always thought that every single Dino-item was worthy of our Dino-desirin', this appears to be one Dinovid not worthy of bein' noted as Dino-treasure. I shares this with you 'cause it does make one know that sometimes you gotta be on the Dino-'lert for misrepresented Dino-merchandise. Unfortunately there are dudes out there who are always tryin' to make a buck off of unsuspectin' Dino-philes likes you and me.

This is definitely one Dino-gift not to put in 'nother pallies Dino-stockin'....actually probably givin' coal woulda be better then this dud of a Dino-production. Dino'lertin', DMP 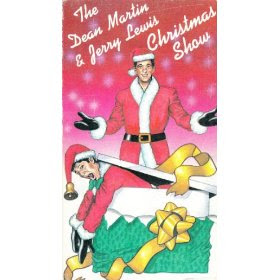 STAR CLASSICS videotape of the so-called DEAN MARTIN & JERRY LEWIS CHRISTMAS SHOW is of the poorest quality throughout. The tape's slipcover is adorned with an amateurish cartoon of Dean and Jerry. An SLP transfer speed means fair tracking at best and a degraded picture quality. Audio ain't so hot, either: it's lo-fi linear and kinda muffled.

Most egregious is this is NOT a real TV show but a badly edited montage of COLGATE COMEDY HOUR segments. Forget this one.

PROGRAM--
Opening: Blurry dub of "Eleven More Days 'Til Christmas" number from a 12/14/52 Comedy Hour hosted by Abbott & Costello!
The tape's only Martin & Lewis holiday-related skit is from their 12/30/51 broadcast. Margaret Dumont is a grade school teacher; Dean & Jerry visit and entertain the kids. (Since when is school in session during Xmas week?)
Jerry does stand-up while Dean prepares for a song. Martin, dressed in pseudo-19th Century garb warbles "Kentucky Babe" with a harmonizing quartet of African-Americans. (unknown date)
Sudden cut to Pete Seeger as a cowboy with guitar. He performs a lengthy "12 Days of Christmas" beside a silhouetted dancing girl. (unknown date)
Rick Hotel, Miami Beach skit. Jerry the new lifeguard can't stop Mike Mazurki from tossing football on the beach. He's equally bad at reviving a drowning victim. Sketch ends with bottomless picnic basket routine. (12/31/51)
Close: In two. Jerry plugs new film, SAILOR BEWARE (1952).

I stumbled on this one here last week, and wan´t too sure if it was the real thing. Thanks for telling about this! By the way, i think i have one or two Dino and kid winter picture, i can find them later today and post them on my blog : )

Hey pallie, likes thanks so much for lettin' me know...we checks out the Dino-treasure at your place...

Hey pallie, a celebrative Dino-winter-time to you Dana, we gonna makes you a Dino-holic yets.....