Hey pallies, well dudes here is like Dinopost numero 300 for this humble little ilovedinomartin Dinoblog. Just found this cool article from ABC News 'bout why the jer wrote his Dinobook tagged "Dean and Me." Loves to read that the jer wanted to do this Dinobio to "demonstrate his respect" for our Dino. Even if the jer and our great man had their differences that split up the act, great to know that the jer loves our Dino and wants the world to know of his Dinorespect. Likes if you wanna reads this in it's original format, just click on the tagg of this Dinopost. Dinorespectfully, DMP 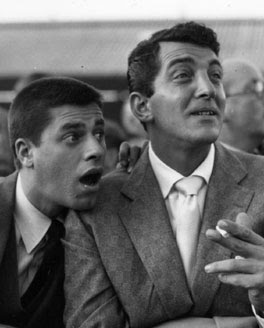 Lewis, 82, is on the Gold Coast as part of Australian concert tour.

He and Martin ended their stormy partnership in the 1950s.

Lewis says his book, Dean And Me, was a chance to demonstrate his respect for the singer.

"It was important enough to sit there and grind out the time and battle the memory to find and remember and do," he said.

"It was a tremendous cathartic [experience] for me."

Lewis, meanwhile, says people should be honoured while they are alive.

"I have been for most of my life dead-set against funerals. I think it's uncivilised," he said.

"If you want to pay respect to someone, don't wait until they croak. Do it while they're here, that's what I believe and that's what I do.

"So if I hear someone's gonna die, right away I run over and tell them nice stuff fast while they're here."
Posted by dino martin peters at 7:13 AM

I have read the book Dean and Me and it is a great read.

Thanks for posting this Dino Martin Peters - more people should know about it.

Hey pallie DMP. I really do want to read this book. I'm sure it was cathartic. It can often be a good thing to talk about our lives and get it all out. I'm glad that the Jer loved our Dino. These two were a great team. Cheers! Keith

Hey pallie Glenn, as Dinoever you are most Dinowelcome...wasn't sure how I was gonna takes the jer's Dinobio before I started readin' it...but indeed it is a great book 'bout our great man..and the jer shows how much he truly loves our Dino...indeed all true lovers of Dino oughta reads this insightful Dinobio.

Hey pallie Keith, as I mentioned to our pallie GLenn, wasn't too sure how I would reacts to the jer's Dinotome...but I found his Dinolove to be truly Dinogenuine...the jer did and does loves our Dino....